Pilot Whales Dive Together, Cuddle and High Five One Another | The Mary Sue

It’s Dangerous to Go Alone: Pilot Whales Dive Together, Cuddle and High Five One Another Underwater

Pilot whales dive in teams and keep their partners close at fin. So close, in fact, that dives are regularly hand-holding sessions for the cetaceans. 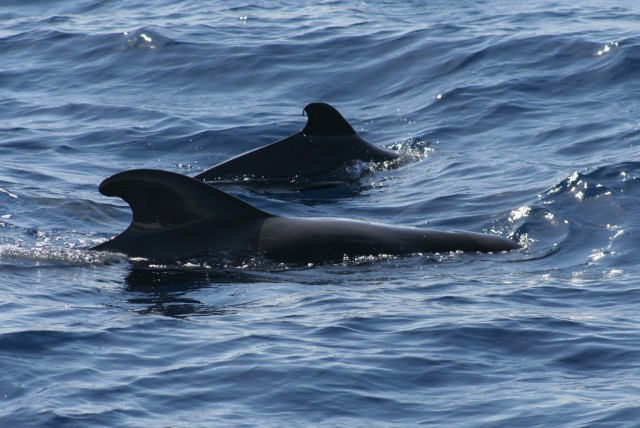 The buddy system isn’t just a good way to keep fourth-graders from wandering off on field trips to the zoo. A recent study found that pilot whales take a buddy when they dive into the dark reaches of the ocean where light doesn’t penetrate and the animals’ vision is limited. On these deep dark dives, University of Tokyo researchers found that long-finned pilot whales — which are actually a species of dolphin — keep in fin-to-fin contact with their diving buddies, turning every deep dive into a perpetual cuddle session for the aquatic mammals. Also, there is some high-fiving.

To follow the whales on their extreme dives —  some of which can take them more than more than 600 meters beneath the waves — University of Tokyo researchers led by Kagari Aoki fitted a pair of the whales with some tracking gear including a camera and accelerometer. Data retrieved from the tracking tech showed that the whales not only started their deep dives in pairs, they stayed within 3 meters of one another for 75% of the time they were below the surface.

Images captured by the cameras also showed that the dives were very tactile experiences, with the whales frequently stroking one another’s bodies and touching their fins together in underwater fistbumps. Researchers don’t know why the whales perform their dives this way — staying in sync so closely likely makes the dives more difficult — but they suspect it may be a way to encourage bonding between the intensely social creatures, kind of like performing a trust fall nearly 2,000 feet underwater.

That ignores the simpler answer, though, which is that it’s dark and scary 600 meters below the surface of the ocean. I’d want someone holding my hand, too.