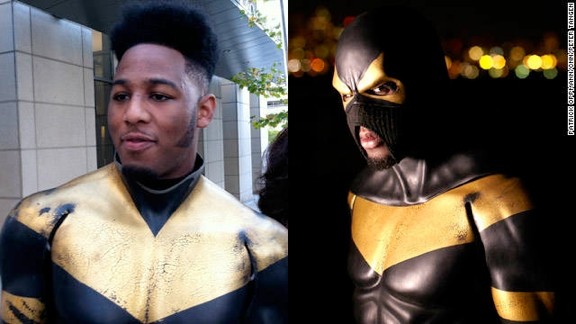 After being arrested for assault earlier this week, the man behind the mask of real-life superhero Phoenix Jones has been revealed. Benjamin Fodor, a 23-year-old man living in Seattle who has a family of his own and moonlights as a man in a rubber suit, fighting crime and protecting the innocent. And he has Gerald’s haircut from Hey Arnold!, which we would never exaggerate about.

Anyway, back to the news. Fodor was arrested for using pepper spray on a bunch of people, claiming that he was trying to stop a street fight, and even recorded video of the run-in, which he then posted on Facebook, saying the following (in all caps):

A bigger fan of justice than of punctuation, Fodor was arrested — in costume — by police while the incident took place then was later released. He maintains his innocence, saying that he wouldn’t harm someone unless they were causing harm to someone else. When he appeared in court yesterday — out of costume — his identity was revealed as one Benjamin John Francis Fodor. But he put his mask on once the legal stuff was over, only to remove it again in a more dramatic fashion for the press outside.

“I’m Phoenix Jones. I’m also Ben Fodor. I’m a father. I’m also a brother. I’m just like everyone else. The only difference is, I decided to make a difference and stop crime in my neighborhood and my area,” said Fodor.

Prosecutors are still deciding whether or not to press charges. Police said in their report that the people pepper-sprayed by Fodor were just joking around and weren’t causing any trouble. Fodor disagrees.

“Unless they’re professional Tae Bo dancers that like to bleed, the video pretty much speaks for itself.”

Fodor left the courthouse without any charges against him, and has invited the police to accompany him on future stakeouts. We don’t like to make predictions, but they will probably not take him up on this offer, what with them actually arresting him and all.