Walk Softly and Carry a Littlefinger: An Ode to Game of Thrones‘ Petyr Baelish

Petyr, Petyr pumpkin-eater, had a Cat and couldn't keep her. 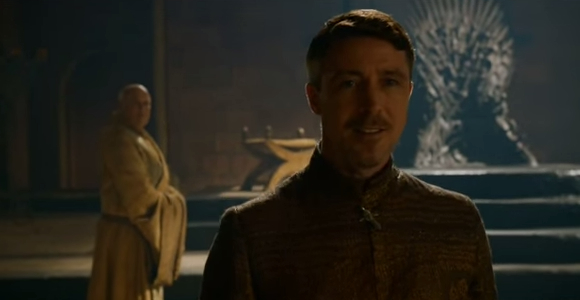 Vile, despicable, slimy and creepy. These are all words I’ve seen used to describe Lord Petyr Baelish, portrayed by Aidan Gillen on HBO’s Game of Thrones. In my estimation, though, there isn’t much that’s more attractive than a man with intelligence, and certainly Petyr has plenty of brains to spare. What motivates Lord Baelish to be the slick political mover and shaker he is? And why is he a character so many people love to hate – or hate that they love?

Looking around on the Internet, there are definite pro-Petyr and anti-Petyr camps. Certainly, he isn’t as amorously adored as Jon Snow or Robb Stark, and not as admired for his wit and cunning as Tyrion Lannister. The people who do appreciate Petyr seem to be the “hate-to-lovers,” shaking their heads and smiling because he’s just so darn good at being evil. And then, like Cersei Lannister, he is completely despised by many viewers because of his ruthless political maneuvering and questionable tactics.

However, I find the character of Petyr Baelish to be one of the most dynamic in the series. His sense of style is flawless, his monologues drip with eloquence, his machinations are nothing short of epic – and these factors work together to create a character that is arguably the most interesting player in the “game of thrones.” His famous “chaos is a ladder” speech defines him as a character. Where others falter and fail, Petyr finds his footing and climbs even higher. He knows what is real and what is an illusion, and he uses this knowledge to pull himself ahead of the rest.

Given that Petyr comes from humble beginnings – he was born to a very small holding within the Vale of Arryn, and was fostered as a ward by the Tullys – he is in many ways a self-made man who relies on his own abilities and motivations in order to gain political position and presence. He goes so far as to take his own sigil – the mockingbird – which both symbolizes the personae has created for himself, as well as a sardonic disdain for those born under an actual sigil. Because Petyr has been shuttered away from the love and acceptance most enjoy in life since the time of his childhood, he has learned to trust only himself. In fact, I would argue it’s the very rejection Petyr has faced throughout his life which he draws from in order to succeed.

His first rejection is, in a way, his father sending him to live as a ward of the Tullys. While he is generally treated well by them, he is still reminded daily that he is not as “good” as the Tullys. (This is evidenced by the nickname “Littlefinger”, which is given to him by Edmure Tully in reference to his family’s small holdings and perhaps his small stature as well.) He rises above the ridicule and perseveres, and eventually falls in love with Catelyn Tully.

And again, Petyr faces rejection. When he finds Catelyn has been betrothed to Brandon Stark, Petyr without a second thought takes on her older, larger suitor, and almost dies in the process. But rather than let that defeat him, Petyr instead uses the experience as the catalyst for the rest of his life. And while he never stops loving Catelyn, in spite of her continuous rejection of his advances, he forges a role for himself in the political landscape of Westeros in which he, a man of low birthright, becomes the central figure.

Petyr is able to advance himself by gaining the admiration (and adoration) of Catelyn’s sister Lysa, and even after she is married to the far wealthier (and much older) Jon Arryn, she still loves Petyr and uses her position in society (and with her husband) to help Petyr move up the political ladder. Eventually, his keen intellect and ability with finances land him a position on the King’s Small Council, as Master of Coin. His business venture as owner and operator of several brothels throughout King’s Landing helps Petyr create wealth of his own.

His rise to power strengthens him as a political player, but in some ways hardens him as a person. To some degree, love has been fleeting for him in his life, becoming an illusion. This changes him from the tender boy who loved Catelyn Tully to the merciless political maneuverer he becomes. No longer does Petyr play nice with those who reject him.

Jon Arryn and Ned Stark do not accept Petyr’s assistance and go against him in their respective roles as Hand of the King, a decision which ends badly for both. Ros, a prostitute from Winterfell whom he first employs as a working girl and then entrusts with the operation of his brothels, learns too late the dark reality of those who betray him. Lysa Tully, whom he eventually marries, becomes a grim reminder of what happens when people attack what Petyr holds dear.

Which brings us to Sansa Stark. It is obvious that to Petyr, she is a poignant reflection of her mother, his dear Catelyn. There was always a sense that, despite all of the horror that she endured at the hands of King Joffrey, Petyr was waiting in the wings, hiding behind the curtains, and never letting anything go too far. It is through Sansa that we learn a very important facet of Petyr’s personality – while his political motivations are great, within him, is a sense of honor that he simply cannot deny.

Through it all, Petyr vacillates between paternal devotion and undeniable attraction to Sansa. It’s the attraction part of this equation that seems to unnerve Game of Thrones viewers the most; at the mildest his character has been called a pervert, and at the worst he has been called a pedophile. I would disagree with this for a couple of reasons. First of all, Petyr doesn’t behave remotely in the same despicable fashion as men like Craster, who takes his own daughters as wives, or Walder Frey, who is a great-grandfather and is married to a woman as young as Sansa.

And it’s important to remember that Game of Thrones is set in a medieval-like world – taking a look back into that era in our own history will show that the age difference between Sansa and Petyr wouldn’t have been considered unusual (for instance, Princess Emilia of Saxony was married at age 16 to George the Pious, Margrave of Brandenburg-Ansbach when he was 48.) Not to mention, Sansa’s aunt Lysa was married to the aged Lord Jon Arryn, who was already thought to be an old man when they wed. And, considering that Sansa is, for all intents and purposes, wed to the much-older Tyrion Lannister, it’s obvious that the age difference that viewers seem to find so disturbing is really no big deal in the world of Westeros.

Therefore, the growing affection Petyr feels toward Sansa wouldn’t necessarily be against the morals of his society; in fact, he sees Catelyn in her. Rather than meet with rejection at Sansa’s hands, though, he’s instead viewed by her as somewhat heroic, something of a savior, and the relationship they form emboldens them both. In many ways, what Sansa has endured has made her far more like Petyr than he may know – she understands the shades of grey that lie in between everything black and white, and knows that behind every good intention lies motive.

Where Petyr’s character evolves to next is anyone’s guess, but I would love to see him come out on top of the game. He’s worked too hard to suffer the same fate as so many characters before him, and it just wouldn’t do for him to be beheaded or run through or pierced with an arrow through the heart. And while I’m under no illusion his future is any brighter than any other Game of Thrones character, it would be satisfying to see him rest on his laurels on the Iron Throne when all is said and done. Some hope he finally learns to love, but seeing him undergo a Scrooge-like transformation would be a little bit too saccharine for me. I can’t imagine doing without the smirk, the wink and the sarcastic wit – I like my Lord Baelish more on the Machiavellian side.

Stephanie Clark is a writer living in the wilds of upstate New York. She resides with her beloved gentlemen offspring, as well as four cats, two dogs and one hamster. She enjoys watching and reading all things science fiction and fantasy, and is an avid collector of Doctor Who and Game of Thrones tchotchke. When she’s not engaged in writing or pursuits of geekery, she enjoys volunteerism and public service, particularly in the educational field. You can read more of her work here.