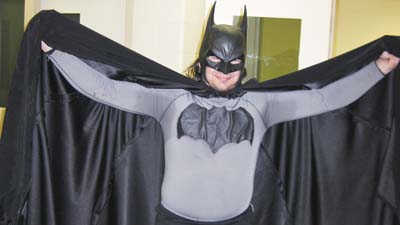 Mark Wayne Williams was found hanging off the roof of a building in downtown Petoskey, Michigan this May, wearing a Batman costume and carrying a baton, a kind of defensive chemical spray, and weighted gloves, presumably for all the punching. Officers dragged him back onto the roof, which he had fled to in order to evade the group of people he was being chased by so as not to have to “deal with the harassment.”

He was charged with an impressive list of concealed weapons related offenses, most of which carried jail time or fines, but his actual sentence has been recently commuted to a six-month period of probation during which he is not allowed to wear a costume. Any costume.

Two things to note here: police say that they’ve “had contact with him in the past where he’s made himself up to look like that Crow character,” so we’re guessing that’s got something to do with this. Also: despite what a minority of Daenerys Targaryen and Dr. Manhattan cosplayers would have you believe, nakedness is not a costume. This will be important information for Mr. Williams.

Likely the court was simultaneously swayed and annoyed by Williams’ rise to local fame, as area businesses began to offer Batman related promotions. Williams himself maintained before the court that he did not know that the items he was carrying were illegal, and his intention was to prevent crime and help the homeless much in the manner of other real-life superheroes around the country.

To sum up: this is just one more black mark on Batman, Inc. as a program.