Chewbacca! What a wookiee. 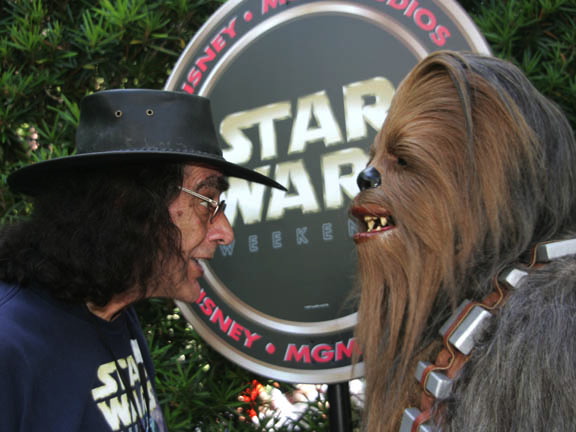 It’s been a big week for Star Wars: Episode VII news, and by that I mean that we know they’re filming it and we actually have a cast member mostly revealed. Yes, we now know two things about the movie aside from the fact that it will be a thing we can go see in movie theaters at some point in the future, but one of them is that Peter Mayhew is Chewbacca, so we’ll take it.

The word that Mayhew (who had double knee replacement surgery last year and was rumored to have been recast) will be playing Chewie again comes from his cancellation of an appearance at Texas’ Comicpalooza. The convention runs from May 23-26, which is right when Episode VII should be shooting, and his appearance was canceled “due to filming.” So, unless he’s filming more unsettling Star Wars Holiday Special scenes, he’s pretty much assuredly in the new movie.

As great as it is that the actor who played Chewie in all of the original films as well as Revenge of the Sith is going to return to the role in Episode VII, it still doesn’t give us a whole lot to go on. Unfortunately, rampant speculation is like a nervous tic for us Star Wars fans. The guy wears a full-body fuzzball suit, so whether or not he looks the same isn’t an issue, but it’s probably not an issue for the rest of the cast, either, since the movie is rumored to take place an appropriate amount of time after Jedi. We’re not sure how they’re going to address that one time Chewbacca sort of died in the Expanded Universe, though, but presumably they’ll have a pretty good way to retcon it away.

Either way, the fact that Chewie is in the movie and they’re going as far as to make sure he’s played by the same actor falls in line with previous rumors about giving the original films’ main characters one last hurrah. Sure, Chewie’s appearance in Revenge of the Sith didn’t get us any weird Han Solo backstory (probably for the best), but it’d be strange to have him in a sequel without everyone else.

Maybe he’ll even drop some excellent set photos on us like he did for the original trilogy. Just maybe make it sooner than 30 years after the fact this time?