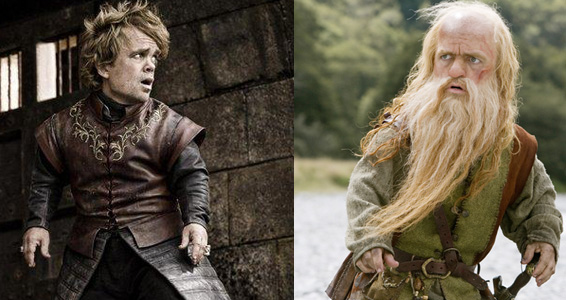 Emmy Award winner Peter Dinklage has garnered a lot of fame thanks to his role in the epic fantasy series Game of Thrones so it’s curious to find out the actor has an aversion to the genre because of how it’s depicted dwarves in its long history. Though technically, he doesn’t consider Game of Thrones fantasy. Hmm, we’ll give you the first, sir but I will argue your second opinion to the death.

Dinklage spoke with The Playlist recently saying, “I don’t gravitate towards fantasy. I do have a deeper appreciation for it because of Game of Thrones, but I never really was attracted to fantasy because of how most writers depict people my size.”

The actor plays the dwarf Tyrion Lannister in the hit HBO show and took on the role of Trumpkin in the Chronicles of Narnia: Prince Caspian. but says he doesn’t want to play the dwarf stereotype.

I try not to read too much into it, but there’s a bit of a bias, where you’re thought of as a mystical creature, which is a bit absurd. I have a great sense of humor — and a dark sense of humor — about everything, but it is a bit narrow-minded sometimes, where if they have a dwarf character, the shoes have to curl up at the end, he has this inherent wisdom, he isn’t sexual, all of that. You look at something like Snow White, and each of the dwarves is just one thing — this one sneezes, this one is angry, this one is tired. And that’s sometimes still true for modern-day stories. But it’s not just for dwarves, that could be the case for anybody, for women, for people of color. Right now it’s Middle Eastern people who are all playing terrorists. It’s short-sighted. But life is too short — no pun intended — to be interested in roles that haven’t got any meat to them.

Dinklage will continue his Emmy-winning role on Game of Thrones for season two in which he gets lots of sex and wears perfectly normal footwear and can next be seen depicting Hervé Villechaize (Tattoo from Fantasy Island) in the indie film My Dinner with Hervé, based on true events.