People in Their 20s Hook Up With Their Exes, Says World’s Least Necessary Scientific Study 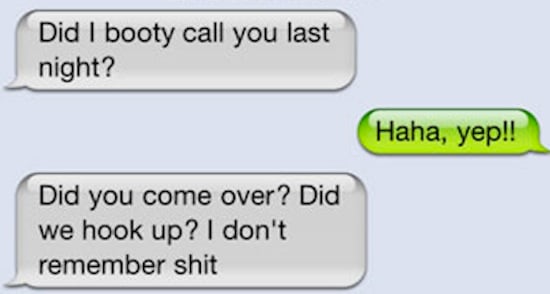 If you’re a person who doesn’t know any other people and has never been in a relationship before, it may come as some surprise to you that sometimes, people who are no longer in relationships do silly things, like have sex together. It’s true! While this fact won’t surprise anyone who has lived on the surface of the planet for any of the last 20 years or so, it has now been confirmed by a study in the Journal of Adolescent Research. In related news, watching a season of Girls apparently counts as scientific research these days. Not that I’m disappointed — by that metric, I’m officially a licensed science-tician! This calls for shots!

In what must be counted as among the least exciting science news of the day, the study of 792 couples and co-habiters found that while breaking up may be hard to do, making that breakup stick is even harder, with 44% of respondents reporting reconciling with an ex over the course of two years, and more than half of those “reconciliations” being unconvincing euphemisms for nailing your ex. While it’s hardly the national pastime yet, those numbers still seem a little bit low to us. Whatever, though — it’s probably not the first time someone has lied to a social scientist about their sex life, and it won’t be the last. Especially when the authors are doling out little gems of advice like this one:

“…having sex with an ex may be problematic because former partners can have difficulty moving on from an old relationship or building new romantic attachments.”

No shit. And here we were all doing this because we thought it emotionally healthy and spiritually fulfilling. Oh, wait, no, the other thing — we were doing it because the world is a cold, dark place and sometimes even the most meager solace of another body next to ours is all we can ask for, even if we know it will ultimately end in hurt feelings and broken promises.

Look, here’s the thing — that this is unhealthy is as unsurprising as that it happens. We know that. We might not act on that knowledge every time, but we have it. The problem is, things are complicated, and relationships are no exception. As we try and guide the boats of our personal relationships between the Scylla and Charybdis of make-up sex and breakup sex (I forget which one is which), the sad fact of the matter is this: if it wasn’t for ill-advised sex with people we don’t like very much, many of us would be having no sex at all. And frankly, science, the last thing we need is you rubbing our noses in it. Not classy, science. Not classy at all.

(via Journal of Adolescent Research)