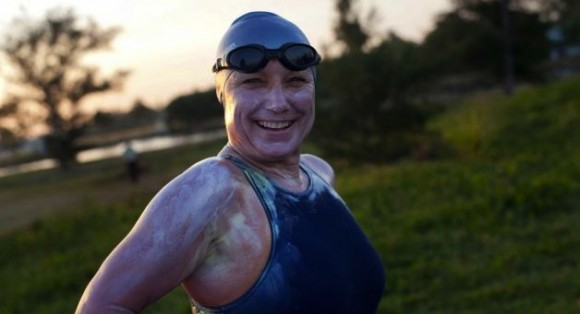 Penny Palfrey, a 49-year-old endurance swimmer, had set out to complete a record-breaking 107-mile swim from Cuba to the Florida Keys. But what set this feat apart from your typical 107-mile swim is that this one was taking place in shark-infested waters. And Palfrey was going to accomplish this without the protection of a shark cage. Around midnight, she cut her swim short with about 26 miles to go, but seriously, can we really call this woman a slouch? Really? Yeah, I didn’t think so.

Palfrey’s goal was to become the first woman to swim from the shores of Havana, Cuba to Florida’s Key West without the aid of a shark cage. Why would she have needed a shark cage? Because those waters are filled with sharks, and sharks tend to like to eat people. Two other women have attempted the same feat: in 1997, Susie Maroney of Australia completed the swim, but with a cage. And Diana Nyad made two attempts without a cage, but was forced to stop one time because of an asthma attack and the other time because of stings she received from another creature who swims in those waters, the Portugese man o’ war. (Nyad plans to try again this year.) In place of a cage, Palfrey was warding off the sharks with equipment designed to deter them, carried on boats with the crew that was assisting her.

And it wasn’t the sharks that stopped Palfrey, nor was it the jellyfish stings — it was the strong, “tricky” currents of the Florida Straits.

“Penny Palfrey had to be pulled out of the water … due to a strong southeast current that made it impossible for her to continue her swim. Penny is presently on her escort boat being taken care of by her crew.”

“She is fine,” Andrea Woodburn, one of the team members, confirmed by telephone from Key West.

The British-born swimmer had been swimming about 41 hours when she had to stop, having stopped after 79 miles — about three quarters of her planned journey. Shortly after midnight, she made the call to end her journey after the currents were too much for her to make any further progress. Had the conditions remained ideal, she was expected to have arrived at the Keys some time today, making the projected total swim a daunting (for us mere mortals) 56 hours.

Penny Palrey was thisclose to achieving her goal. No word on whether or not she’ll try again, but I have a feeling she’ll have another go.