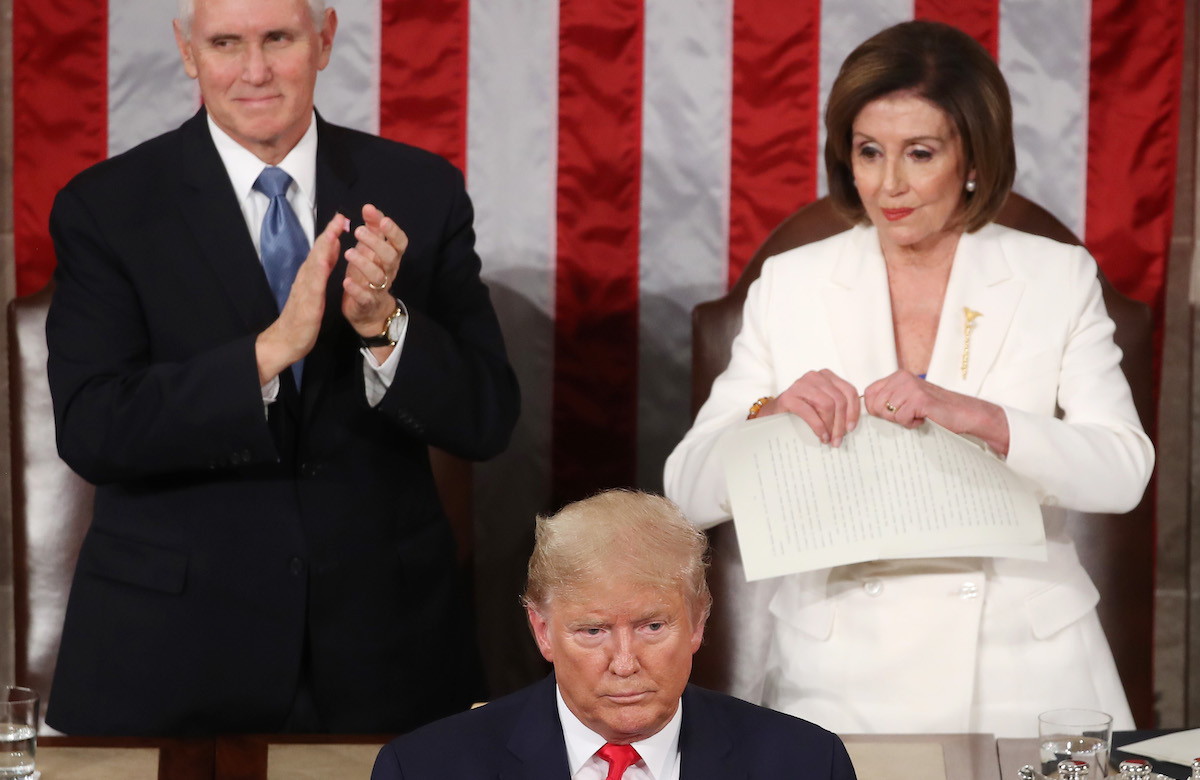 There’s not much worth talking about from Donald Trump’s speech last night. It was basically an hour and twenty minutes of lies of all sizes and subjects. That’s why the only moment that is worth mentioning is how Nancy Pelosi reacted when it was over, which was to rip the speech in half.

.@SpeakerPelosi tears up of State of the Union speech.#SOTU #SOTU2020 pic.twitter.com/sIpi4G7KsL

As House Speaker, Pelosi sat behind Trump and next to Mike Pence for the duration of the speech, meaning this moment at the end was highly visible.

Look, she had to compete with last year’s GIF. pic.twitter.com/xM2Kgvv6HZ

When asked why she chose to rip up the speech, she told reporters it was the only “courteous” thing to do when asked to bear witness to a bunch of lies and insults.

I just asked Speaker Pelosi her reaction to the #SOTU speech.

“It was the courteous thing to do,” she said. https://t.co/b5rVil4ply

Q: Why did you tear up the speech?

PELOSI: “Because it was the courteous thing to do.”

PELOSI: “It was the courteous thing to do considering the alternative.”

There are some people saying they wish she’d done more, or not attended the speech at all (or not invited Trump to speak to Congress in the first place). But this gesture has definitely succeeded in redirecting the conversation away from Trump’s terrible speech, as the #1 topic of conversation online right now is her reaction to it.

Seems to me like Pelosi took a page out of Trump’s playbook and stole the spotlight away. No one’s talking about the speech now.

Trump has now tweeted/retweeted more about Pelosi’s reaction to his speech than about the content of his own speech. Four times more.

Choosing to make such a statement and create this sort of distraction also meant turning herself into a lightning rod for conservatives. Trump has retweeted nearly two dozen (and counting) tweets about Pelosi. #PelosiTantrum and #PelosiMeltdown have been trending Wednesday morning. Which is strange because her calm and deliberate demeanor doesn’t look like any sort of “meltdown” I’ve ever seen.

I’m just glad that I live in a country where people who call others “sensitive snowflakes” are crying that a mean lady tore up a piece of paper.#StateOfTheUnion

Still, we’re going to have to listen to all the bad faith arguments about how Pelosi hates America or whatever and how this is just the absolute worst thing a human being could do. No one actually believes that but Republicans are really good at pretending to be offended.

Another great example of the “hack gap.”

Nobody on the right actually cares about this. But they know that, if they complain loudly enough, they’ll trick dumb CNN-types into talking about it. And they’re right. https://t.co/c8h6EBXW9E

The only problem with ripping up that speech is that the media will spend all night and day debating whether it was in good form, whereas if Trump had done it Fox News would have called it a power move. Everyone is SO DUMB.

You know what we say to political concern trolling though.