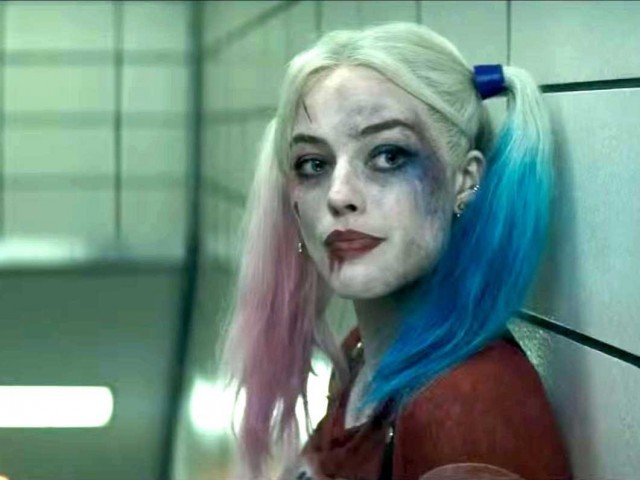 Having read the full quotes from Harley Quinn’s co-creators Paul Dini and Bruce Timm, I think it might be a stretch to say they love her new costume design in Suicide Squad (as some headlines have reported), but they both seem cautiously optimistic. Bruce Timm has said he thinks the costume is “interesting” and “pretty cute,” and now Paul Dini has weighed in with his thoughts on the design:

I know it’s jarring to a lot of the people who love the classic Bruce Timm suit, I love it myself. But in that world [of the Suicide Squad movie], I just don’t see it happening. It’s a rougher, more street look. I think it works fine.

Dini went on to emphasize how the costume fits in to the rest of the film’s aesthetic, describing Jared Leto’s Joker costume as a “decadent rockstar.” He elaborated,

There’s a little bit of Sid and Nancy to the Joker and Harley look, which I always felt would not be a bad look if they were in a live-action movie. If you put them in that realistic world I feel they would look like down-and-out rockers. They would look dangerous.

I wouldn’t go so far as to call this “damning with faint praise,” but it does sound to me like both of Harley Quinn’s co-creators are not so much concerned with her outfit as her character’s overall depiction — and I agree with them there. The “Daddy’s Little Monster” shirt struck me as a strange choice when I first saw it, but if Suicide Squad backs up its sartorial choices with good writing and clever plotting, that’ll make it hit home for me.

What do you think about Bruce Timm and Paul Dini’s comments? Does the Suicide Squad aesthetic seem like a good fit for Harley and the Joker?