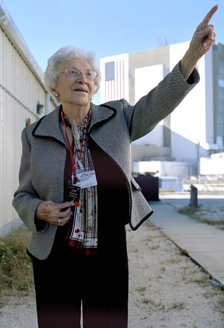 While we readily admit to nostalgic sympathy with the tiny planetoid known as Pluto, when the International Astronomical Union gets together and finally puts a definition on “planet,” well… that’s science.

Okay, it’s not so much research and hypothesis as much as it is classification and taxonomy, but without the latter the former would be a lot more difficult. Folks on the losing side of the Pluto debate weren’t wrong in their research… they just wanted a larger definition. Last week, the small planetoid lost one of its big supporters, Patsy Tombaugh.

Tombaugh was the widow of Clyde Tombaugh, the astronomer who discovered Pluto in 1930 (he named an asteroid after her, which is romantic as all heck), and one of the dwarf planet’s foremost supporters during the 2006 six process of defining it out of the category of planet. Clyde died in 1997. From MSN’s Cosmic Log:

Patsy took on the job of keeping Pluto in the spotlight, during a time when more worlds were being discovered on the solar system’s edge. She was a guest of honor at the 2006 launch of New Horizons, NASA’s mission to Pluto, and was in tears at liftoff. When Pluto was reclassified as a dwarf planet later that year, few people took it harder than Patsy. “I don’t know just how you handle it,” she told reporters. “It kind of sounds like I just lost my job.”

But Tombaugh was there when New Mexico’s House of Representatives (not exactly an accredited scientific institution, I’ll admit) declared March 13 Pluto Planet Day, and was still fighting the fight in 2009 when Cosmic Log visited her. She is survived by two children, five grandkids, nine great-grandkids, and one great-great-grandchild. Oh, and one asteroid.