Passenger Was Violently Dragged From United Airplane for No Goddamned Reason

Just when you thought air travel couldn't get worse. 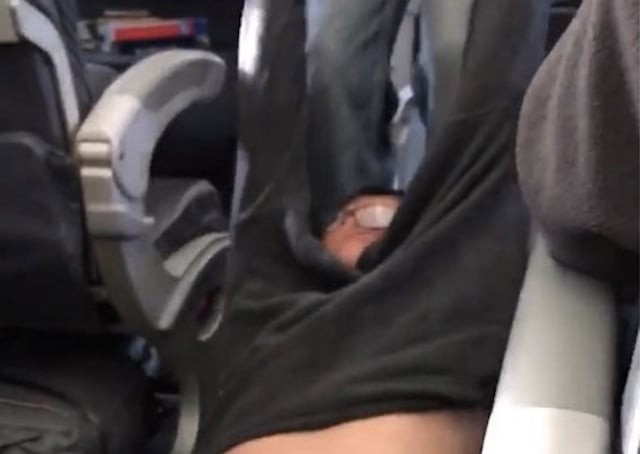 What the hell is going on over at United? A mere two weeks after the brouhaha involving young girls wearing leggings, the airline is under fire for forcibly removing a seated passenger from an overbooked flight. Warning: this footage is really disturbing.

Flying already comes with so many security theater hassles at the airport that the most you’d expect once you make it to the plane is to not be physically assaulted. Well, add “potential for violent attack” to your next travel to-do list.

United’s Sunday night flight from Chicago to Louisville was apparently overbooked. Generally, in situations like this, the airline asks for volunteers pre-boarding and offers travel credits or even cash as an incentive for people to take the next flight. Maybe this time no one volunteered or there were not enough volunteers, because the airline staff decided to choose its own “volunteers” at random and remove them from the plane once they were already seated, despite objections.

@United overbook #flight3411 and decided to force random passengers off the plane. Here’s how they did it: pic.twitter.com/QfefM8X2cW

United has confirmed passengers’ testimonials that the assaulted man did nothing wrong other than refuse to give up his assigned seat. According to reports, the man was a doctor and refused in part because he needed to be back at his hospital in the morning. But his occupation shouldn’t matter. We should all have the reasonable expectation not to be injured as we are manhandled, shrieking, from an aircraft.

You’d think United would have better disaster management PR in place following the leggings debacle, but even their explanation is unsatisfactory. Their statement reads: “After our team looked for volunteers, one customer refused to leave the aircraft voluntarily and law enforcement was asked to come to the gate.” The airline needed the seats for their own crewmembers. But even if it was absolutely essential that those crew get to their next destination, there had to be a better way to go about this than plucking up people at random.

The use of force in this case is totally uncalled for and totally terrifying. In our smartphone era, we’ve witnessed many instances of videotaped unruly passengers detained and taken from planes. But we haven’t seen anything like this before.

In another view of the airport police’s assault on the man posted on Facebook, you can hear the other passengers pleading for them to stop and begging that there has to be another way, as the man is dragged dazed up the aisle, his lip split and bleeding. The whole thing is so unsettling that I’m having trouble watching the videos again in order to write this.

At least this is one instance where social media swoops in on the side of good. The videos have been shared thousands of times and the story is all over the place, and outrage against the airline is at a fever pitch. I hope this man sues United—and especially those law enforcement officers “just following orders”—into oblivion. But we should all be afraid of the world that we’ve made, where violence like this can happen in the blink of an eye, in response to any act of noncompliance.