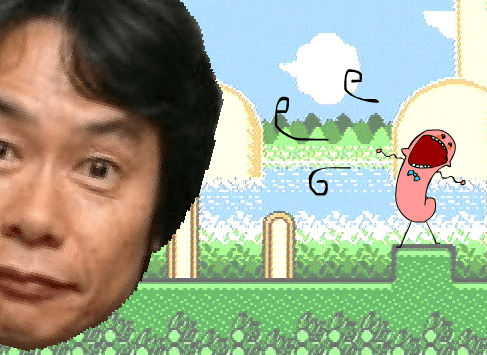 Social networking is a perfect storm for parodies of public figures, and game developers are no exception. You might be aware of @PeterMolydeux and his ridiculously lofty, high-concept pitches. If you like that, but you want something a little more absurd, @miyamotodev is a must-see. You know what? It’s a must see in general. When Shigeruo Miyamoto announced he was stepping down to work on smaller games, I never thought this would be the glorious, glorious outcome.

Miyamotodev has 2 different places you can check out his work, both of which are definitely worth perusing. First, obviously, is his Twitter account @miyamotodev where you can watch him try to use Google and succeed in tweeting his search queries. Looking back, it seems like these tweets can serve as good spoilers for his upcoming projects. Keep an eye on that.

Second, his projects are hosted at his lovely, lovely Tumblr. So far, he’s put out two games: The playful Kirby Face Adventure and the absolutely sublime Mario Shout. In the skilled hands of Miyamotodev, no Nintendo franchise runs the risk of being forgotten or under utilized. If he keeps it up at this rate, who knows what kind of brilliantly reimagined classics the future holds. He’s only recently gotten the ball rolling, but hopefully a spike in attention will urge him to keep on doing what he does best. I can’t wait for the next one.