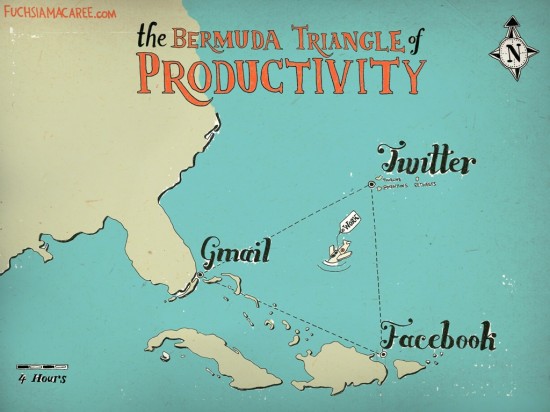 Social media can be a veritable wasteland. It’s hard at times to separate the wheat from the chaff, as it were, and follow only those developments that are genuinely worth following. Given the average signal-to-noise ratio of any social platform, it can be surprisingly difficult to find likeminded folks who have updates of any merit in addition to being worth following.

But that’s what we’re here for, by gosh! Below, you’ll find an eclectic mix of artists, writers, comedians and bloggers that all vary in their position along the Scale O’ Geek, but are similarly awesome. And really, a little geek and a lot of awesome are better than lots of geek and no awesome.

This account takes a satirical look at what must be going on inside the head of Peter Molyneux, the man behind games like Fable and Black & White. The best part is that these humorous takes often sound like something Mr. Molyneux might actually cook up.

For those who don’t know, there’s a style book that lays down the law for anyone wanting to publish material in the Associated Press. Many outlets out there use this same style book with minor variations. This twitter publishes rules that are unfortunately not included in said style book.

Kelly Oxford is a blogger. Often enough, she’s vastly amusing. She will sometimes remind her followers that she’s a mom in her 30s. Being a mom is part of her life, but isn’t what consumes her whole being; she is still a funny person.

Neil Patrick Harris truly needs no introduction. The star of How I Met Your Mother, Doogie Howser, M.D. and, of course, Dr. Horrible’s Sing-Along Blog. Twitter is probably the easiest way to keep track of his current projects. Straight from the horse’s mouth, all that.

Dan Harmon might currently be best known as the guy who gets the Created By credit at the beginning of the television show Community, but many in geek circles perhaps would follow him more closely if they knew that he was once a major member of the Dead Alewives. As in, these guys.

Warren Ellis is a writer of many things. Though he is perhaps best known for Transmetropolitan, his work continues to this day across various franchises and mediums. His Twitter is included here to keep track of his wayward wanderings and new material.

The Twitter of the one, the only, Neil Gaiman. Gaiman’s work as an author includes episodes of Doctor Who, the Sandman comic series and novels such as American Gods. If there can be words written for it, chances are that Gaiman has had his hands on it.

@IGLevine – Ken Levine is head of Irrational Games, the studio behind BioShock. Need I say more?

@ryanqnorth – Ryan North is Dinosaur Comics. Please to be reading if you have not already.

@zoetica – Zoetica Ebb is, among other things, an artist. She has also been known to photograph for Suicide Girls. Yes.

@emilyterrible – If there’s a touch of subjectivity here, it’s in my inclusion of artist Emily Carroll. Her comics and video game doodles are some of the best out there.