U.S. Secretary of Defense Moves to Lift Ban on Women in Combat Roles in the Armed Forces 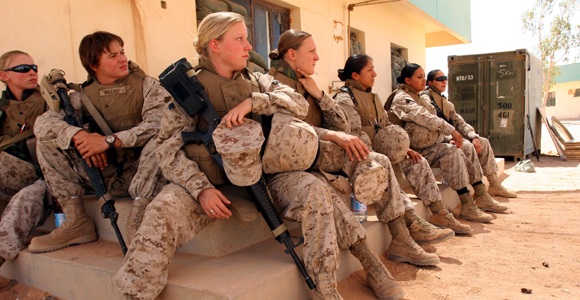 As was reported by several news outlets last night, Defense Secretary Leon Panetta, with the support of the Joint Chiefs of Staff, will announce a repeal of the ban on women in combat positions in the U.S. Armed forces this afternoon. Lifting the ban will be the largest expansion of the available roles for women on the front lines of American conflicts yet (although we did have one just a year ago), and with that comes a commensurate increase in opportunities for women to gain recognition for their service in such a way that will make it easier for them to earn the promotions necessary for a life-long career in the Armed Forces. Panetta said earlier today, in an unrelated public appearance, that every member of the U.S. military should have an equal opportunity to pursue “every avenue of military service for which they are prepared and qualified… Our military is more capable, and our force is more powerful, when we use all of the great diverse strengths of the American people.”

So I guess it’s a good thing they figured out that “body armor that actually fits” thing.

A lot is already known about how the lifting of the ban will be implemented. It will require all U.S. military services to examine the 230,000 jobs that are still unavailable to women in order to establish gender-neutral requirements for admission to them and/or determine whether women can serve alongside men in those specific capacities, with the goal of making all jobs available as long “as we can meet the standards of the war fighter” by 2016. Says the Wall Street Journal:

The Pentagon’s ban on women in combat roles has been subject to a rising tide of criticism lately. The Pentagon dismissed the suit of Colonel Ellen Haring and Command Sergeant Major Jane Baldwin in September, and in October the ACLU brought suit on behalf of four servicewomen. The arguments of both suits were essentially the same: the nature of the conflicts in which the U.S. is currently involved in already puts women in combat with frequency: more than one hundred and fifty female armed forces personnel have died in Iraq and Afghanistan. The effect of banning women from combat positions merely serves to exclude them from vital training, as well as recognition and promotions based on their actual experience. Haring, for example, was selected and trained to oversee female soldiers whose jobs would have been to find and interview Afghan women inside of combat zones, an interaction that is culturally proscribed from men.

“There was this open acknowledgment that they knew they were violating the combat exclusion policy,” Haring said of her training at Fort Bragg. “It was decided, well, we’re going to support this program and not worry about the exclusion policy.”

Though she was being trained to oversee women who were being sent into a combat zone, it was understood that none of those under her command would receive the arms training considered necessary for their male colleagues because such training is only offered to those who can undertake actual combat roles. Before Haring could assume the leadership spot and put her training to use, however, she was passed over and the promotion was given to a lower ranking male officer with combat experience.

Among the many other exciting possible effects, one would hope that a larger number of avenues towards the higher ranks for women will eventually have a positive effect on the overall attitude, from the ground up, in the armed forces on the existence, prevention, reporting, and consequences for sexual assault within the U.S. Military.

Secretary Panetta is due to officially announce the lifting of the ban in a press conference today around 1:30.

women in the military