Review: Pacific Rim Uprising Is Flawed and Fun as Hell 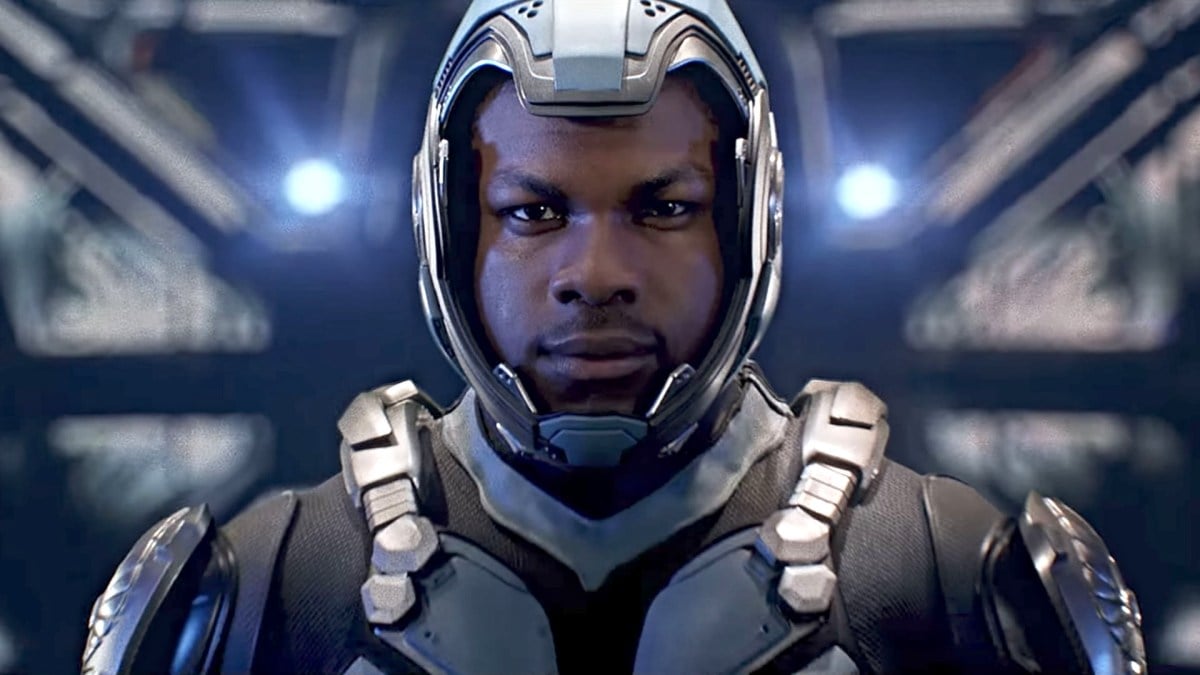 Pacific Rim Uprising is a loud, ridiculous film about giant fighting robots and massive monsters from an interdimensional portal under the ocean. It’s totally over-the-top, and it’s also the most fun I’ve had at the movies in ages.

In contrast to almost everyone I know, I didn’t love Guillermo Del Toro’s original Pacific Rim and figured that this follow-up, directed by Steven DeKnight, would be a pale and preposterous imitation. But while Uprising is certainly preposterous, it’s incredibly colorful, and I never felt like it was speaking down to its audience or trying to be anything but itself.

This is a movie that doesn’t take itself too seriously, and it invites you to do the same—to kick back and just enjoy some smashy-smashy Jaeger action while you try and keep up with the ever-changing plot and near-constant threats to humanity.

Uprising follows Jake Pentecost (John Boyega) as he goes on a reluctant hero’s journey. The son of Idris Elba’s Stacker Pentecost, Jake is forever in the shadow of his father, who died saving the world in Pacific Rim. It’s not easy being the son of such a lauded figure, especially when you washed out of Jaeger pilot training in your misspent youth.

But circumstances conspire to bring Jake back into the pilot fold at the behest of his adoptive sister Mako Mori (Rinku Kikuchi), another original Rim hero, now an important figure in international relations. Accompanying Jake is a smart, streetwise teenager, Amara Namani (Cailee Spaeny), who built her own small Jaeger (appropriately called Scrapper) from scavenged parts.

While Amara joins the cadets, Jake must rejoin the upper ranger ranks, which means sorting out his history with his old drifting partner and co-pilot Nate Lambert (Scott Eastwood), who has kept to the militaristic path Jake abandoned. Needless to say, the two men are soon back in the cockpit of the flagship Jaeger, Gipsy Avenger, and just as quickly put into action as new threats descend on a world that’s seen relative peace in the ten years since Pacific Rim‘s Kaiju-crushing events. 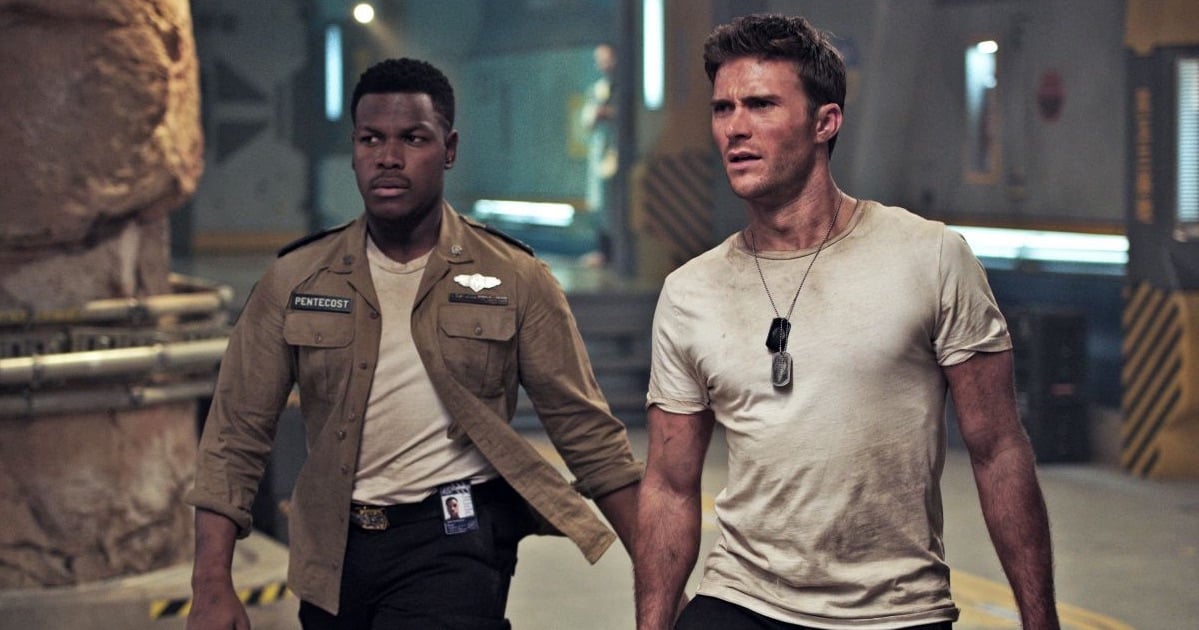 For a movie that we all know is ultimately going to devolve—or evolve, depending on your perspective—into a showdown of city-flattening proportions between loud giant beings hurtling at one another, there’s still some attention to human character development. As Jake finds his legs as a skilled pilot and natural leader, Amara navigates cadet life, and Drs. Hermann Gottlieb (Burn Gorman) and Newton Geiszler (Charlie Day), the scientist odd couple who were fan favorites in the first film, have a lot to do here, both of them merrily chewing the scenery as they go along.

Pacific Rim Uprising manages to be totally predictable and unpredictable at the same time, with twists that I did not see coming, while others are impossible to miss (this is not a subtle film). This keeps things enjoyable, because while the movie hits lots of well-trodden tropes, it also goes out of its way to subvert others. I particularly love what they do with Liwen Shao (Ting Jing) who plays the sort of ruthless tech entrepreneur we’ve seen a thousand times before. When I thought that Uprising was headed for the dumbest action movie standards, it managed to surprise me.

There are some elements at play here that I don’t love: a weirdly forced attempt at a love triangle with no development or heat that seems shoehorned in as a kind of “No homo!” shield between Jake and Nate (who share plenty of heat, and whose fandom I could see blossoming before my eyes). Kaiju biology and high-tech babble that goes by so quickly in frenzied briefing scenes that you eventually just throw up your hands and say, “Sure, sounds legit.”

And the final battle flattens buildings for so long that it might be the least exciting element. It delivers on a giant smashy level, and let’s be real, that’s a lot of what we’re here for—the Pacific Rims are ultimately monster movies. Still, the stakes of the Jaeger fights never feel as high as they could be, and it would be nice to see a villainous plot that doesn’t place the entire world in imminent, eye-rolling peril.

Yet Pacific Rim Uprising has much more heart and spirit than I was expecting. As a leading man, Boyega is compelling and inspiring, so good in action mode that you’ll be angry all over again at how much Finn was wasted in The Last Jedi. As a sidekick he’s given a brilliant, audacious teenage girl—more of this!—and the entire cast is so gorgeously diverse that it should set the standard going forward.

The women are powerful, not overly sexualized, and feel important in a way many enormous fighting robot movies miss (I’m looking in your direction, Michael Bay). In terms of representation, Pacific Rim Uprising gets an A+. (Except for that love triangle. It’s hard not to long for a future time when Jake and Nate might be able to trade meaningful looks without needing a MacGuffin woman between them.)

Pacific Rim Uprising is by no means an intellectual cinematic experience, but it’s enough fun that you’re willing to forgive its trespasses. When you find yourself wishing that we had more scenes with the interesting characters and less shiny new Jaegars in battle formation, that’s not the worst thing you can say about a movie.

DeKnight comes out of a background in genre TV direction and writing (Daredevil, Smallville, Dollhouse, Buffy, Angel), and that shows. I wouldn’t mind spending a few seasons with these folks in Jaegar training, slowly getting to know what makes them tick. More character development and less mindless destruction of cities could’ve made this something really special, but there’s always the next movie, which is nicely alluded to here.

Turn off your brain and indulge in Pacific Rim Uprising. Young adults will love it, and I think many adults will, too. I’m still drifting.