Almost As Good As Gills: Scientists Create a Microparticle That Supplies Oxygen Without Breathing 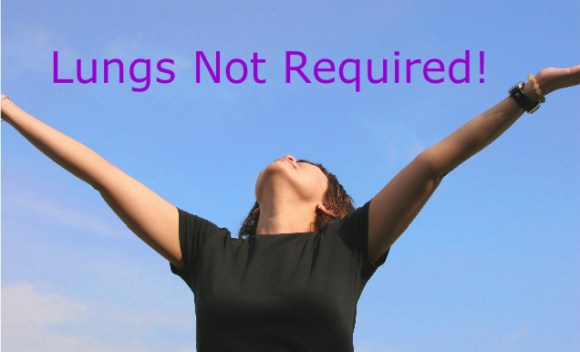 Progress is making us lazier and lazier, amirite? Remote controls, smartphone machines, cheese in cans. And now, science is making it possible for our blood supply to receive enough oxygen to our bodies without us even having to breathe. This is terrible news, you guys. If we can’t use “getting winded” as an excuse, how are we supposed to avoid exercising?

I’m kidding. This is actually a pretty important medical breakthrough.

Researchers have invented a solution of microparticles made up of “oxygen gas pocketed in a layer of lipids” that can sufficiently supply a human bloodstream oxygen for 15 to 30 minutes after someone has stopped breathing. This has the potential to be a real lifesaving technique for patients who go into respiratory failure and risk death after oxygen is cut off from the brain. When injected directly into a vein, the oxygen is introduced immediately, giving doctors the precious time they need to perform other vital functions while avoiding the risk of brain damage or death in their patient.

Even more important is that the levels of oxygen aren’t just enough to get by — it is reported to provide “near-normal levels” to the blood. Plus, the solution is a lot more portable than a heart-lung machine:

These fatty oxygen particles are about two to four micrometers in size. They are suspended in a liquid solution that can be easily carried and used by paramedics, emergency crews and intensive care personnel. This seemingly magic elixir carries “three to four times the oxygen content of our own red blood cells.”

Previous formulas failed because of gas embolism, which has been worked around by putting the lipids in a “deformed particle” rather than a bubble, which “increase[s] the surface area for gas exchange and are able to squeeze through capillaries where free gas would get stuck,” according to Science Daily.

But to be sure, it’s in no way a permanent solution for respiratory failure:

“This is a short-term oxygen substitute — a way to safely inject oxygen gas to support patients during a critical few minutes,” [John Kheir, MD, of the Department of Cardiology at Boston Children’s Hospital] says. “Eventually, this could be stored in syringes on every code cart in a hospital, ambulance or transport helicopter to help stabilize patients who are having difficulty breathing.”

And time is everything, as Dr. Kheir knows. He was inspired to develop this solution after a sad case in 2006 of a little girl with pneumonia. Before she could be put on a heart-lung machine, her condition caused so much bleeding in her lungs that her oxygen levels plummeted and she died. Dr. Kheir wanted to find a faster way to supply oxygen to the blood — such as injecting it directly into a vein. And now, it looks like they might have a solution.

But no, this does not mean we can go scuba diving without all the gear — yet.

(Science Daily via Gizmodo via I Heart Chaos)