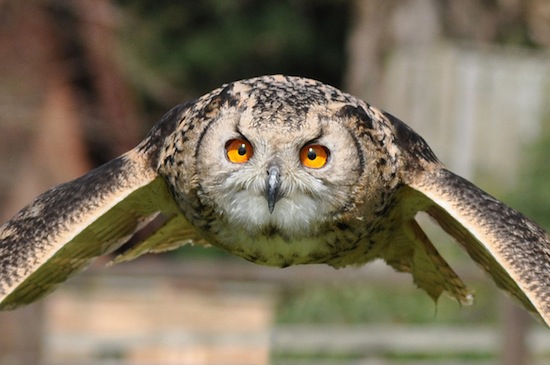 Remember when Harry Potter fans all wanted pet owls, but then realized that they are vicious winged harbingers of death? Turns out they’re also silent harbingers of death, and new research is examining how owls stay so quiet in flight. The goal of the study is to make modern aircraft more silent and owl-like. We suggest building an aircraft that is made from feathers and runs on mice.

The study was done by researchers at the University of Cambridge in England, and will be presented at the American Physical Society’s Division of Fluid Dynamics meeting which is happening now in San Diego. The researchers looked at things like the structure of the owl’s wings and its plumage for clues as to how the predator can fly so silently.

The way wings work, whether mechanical or owl, creates a turbulence as air moves around them. This turbulence is often amplified by the trailing end of the wing, becoming audible. The speed at which modern aircraft can travel, and the hard design of the trailing edges of airplane wings, make the resulting sound particularly loud.

Unlike hard airplane wings, owls have characteristics like soft feathers on the top of their wings, and a flexible trailing edge. Part of the focus of the study is to determine which of these attributes, or which combination of attributes, is responsible for the owl’s near-silent flight, with the ultimate goal being to learn how owls stay so quiet and whether those techniques can be applied to aircraft.

In other words, they’re basically trying to build Daniel Dreiberg’s Owl Ship “Archimedes” from Watchmen. Or maybe they’re just trying to reduce aircraft noise for practical purposes, but if someone starts patrolling the University of Cambridge dressed as Nite Owl in a ship that hovers silently we’ll have a pretty good idea of who’s responsible.

(via Phys.org, image via dingopup)