Meet Ouya, The Android-Based Gaming Console With a Woman CEO | The Mary Sue

I apologize, dear readers — we’ve been utterly remiss in reporting about Ouya, the Kickstarter sensation that aims to pack an open, Android-based game platform and development kit into a teensy console, effectively bringing the best parts about hackable indie gaming to the television. In only eight hours, Ouya raised $1 million, surpassing its original goal of crowdfunding $950,000 in 30 days. With just 35 hours remaining on their Kickstarter, Ouya has raised $7,163,016, from a total of 53,891 people interested in the project. Oh, and the icing of top of this so-far successful gaming project cake? The entire project is led by gaming industry veteran Julie Uhrman. Hit the jump to find out more about this woman-led, revolutionary console!

Ouya, in its simplest form, is a console that aims to bring “innovation, experimentation, and creativity to the big screen.” The makers of Ouya argue that a huge brain drain has taken skilled game devs away from console gaming toward mobile game platforms. Ouya hopes to lure these folks back to developing for a console with an open, hackable, and cheap development kit, on the condition that at least a part of a demo of any games made be free-to-play.

Here are the Ouya’s specs, thoughtfully complied by Kotaku:

The hardware itself, which is designed by Yves Behar, aims to be very stylish and user friendly. Here’s a glimpse of the controller, which are also currently being optimized for color blind users: 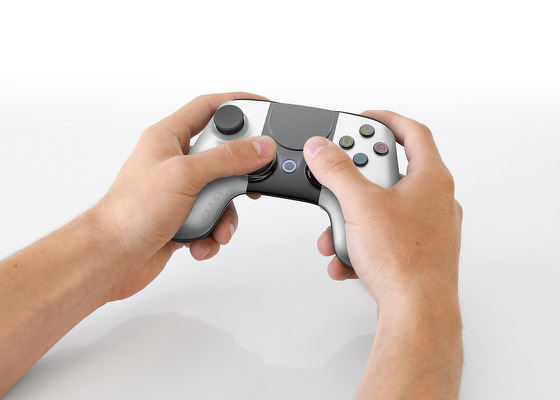 The console will also be very easy to open up and mess around with — there aren’t any proprietary screws, and you can root the console without voiding any warranty, a hackers dream.

So, yeah, in theory Ouya sounds fantastic, but how will it fare in real life? Well, we think quite well.

Considering the console itself will only cost $99, this project is making a huge step in the right direction towards making games more affordable. After all, one of the most played games in the world is League of Legends, a free-to-play MOBA in which the only items that require real money are purely cosmetic — and as AAA console titles skyrocket, big game developers seem more and more out of touch with the state of the world’s economy and the financial goals of their consumers. We think Ouya is paying close attention to its consumer base, and based upon its reception thus far, it’s obvious gamers like what they’re showing us.

Furthermore, Ouya already has some high profile partners: the console will have game streaming via OnLive, an exclusive Final Fantasy title, VEVO music videos, and the open source media player XBMC. High profile game developers such as Jenova Chen (thatgamecompany, flOw, Flower) and Mojang (Minecraft) have thrown their support behind the new console as well.

Frankly, I only have one question lingering on my mind: does Julie Uhrman plan on securing a female market for Ouya, and if so, how does she plan to do it? It’s no secret that mobile games attract more women than men— and considering Ouya plans to bring Android-powered games to the console and, in a way, bridge a casually-focused game development kit with a “serious” user interface (and user base), I’m curious as to whether or not Ouya will try to attract casual women gamers to the console.

Personally, I would love to see it happen, and at the right price point, with the right marketing, I don’t think it’s a pipe dream. It’s high time we included casual gamers into the fold, and I think doing so would start the process of unlearning a lot of the exclusionary, bigoted cult-brain mentality game communities tend to develop. Because let’s be honest, even folks who claim to only play gamer’s games for gaming gamers sneak in a bit of Angry Birds or Tiny Tower.

To Uhrman, the Ouya is a “love letter to gamers,” and its a beautiful letter thus far — I just hope its addressed to all gamers, 40-year-old Farmville-loving soccer moms included.

(via Kickstarter and Kotaku.)