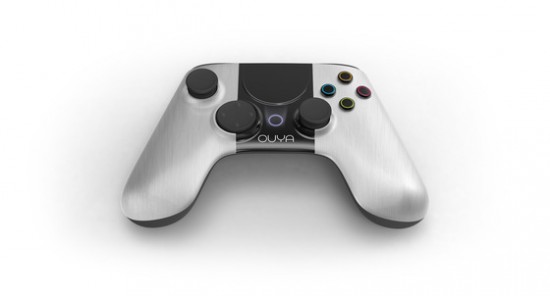 Remember the OUYA? The little game console that exceeded its Kickstarter goal on the first day saw a few big announcements today. First, game-streaming service OnLive will be featured on the OUYA. On top of that big news, the console’s controller was revealed. Make the jump to learn more!

It’s been quite a month for the OUYA. In only 17 days, the project’s Kickstarter has received nearly six times as much backing as was predicted in the original goal of $950,000. Infinity Ward’s Robert Bowling announced that an episodic prequel to his studio’s new survival horror game, Human Element ,will be released exclusively for the OUYA. The project has 43,779 backers and counting. Not bad for a console that was announced a little more than two weeks ago.

We got another taste of the OUYA today when we saw this post on the project’s Kickstarter page. “OnLive is coming to OUYA!” OnLive is a popular cloud gaming platform which lets users play games on a variety of platforms on-demand. Over 80 publishers have partnered with OnLive and make their games available via the service. These publishers’ games will become available for on-demand play on the OUYA when the console is released next March.

Bruce Grove, General Manager of OnLive had this to say on OnLive’s official blog about the partnership:

When OnLive first heard about OUYA, we were excited to see console gaming becoming more available and open. Like OUYA, we came to gaming with a new vision for making top-quality gaming accessible to more people, and we continue to look for ways to expand on that vision.

OUYA is rethinking the console business, making waves by using standard technology to make gaming for your living room accessible, affordable and more innovative than ever. In OnLive’s case, we pioneered a groundbreaking, cloud-based system that instantly delivers games to any device on demand.

We are pleased to announce that OnLive will be available on OUYA at launch, extending and building on our commitment to make the best games available to everyone, everywhere.

What does that mean for OUYA backers?

OnLive already delivers a premium gaming experience to tablets, smartphones, PCs, Macs, connected TVs and HDTVs via the OnLive® Game System or dedicated streaming devices like the VIZIO Co-Star. We’re pleased to deliver the same OnLive experience on the OUYA console when it launches next year.

We also got a first look at the OUYA’s controller, which is supposed to have a touchscreen and a snazzy, ergonomic design. While the controller is still in development, the picture released in today’s update (seen above) is the most complete picture we’ve seen of the controller so far. We also got a few glimpses of the console itself. It doesn’t look like any console I’ve seen before, I can tell you that much, but you can’t deny that it looks pretty darn sleek.

So, what does all this mean? The inclusion of OnLive means that we’ll be seeing games from publishers like Ubisoft, Take-Two Interactive, and Epic Games in addition to the smaller indie developers on the Rubik’s Cube-sized console. The controller pictures mean that they are, indeed, still working on the damn thing. It’s going to be one heck of a release come March. Will the OUYA live up to its claim that “the revolution will be televised?” Is this the revolution in gaming we have been waiting for? Will this turn out to be the next great leap in video games? Maybe, maybe not. But, one thing’s for sure, OnLive won’t hurt.