We love science, but "floating souls" is admittedly way cooler than this explanation. 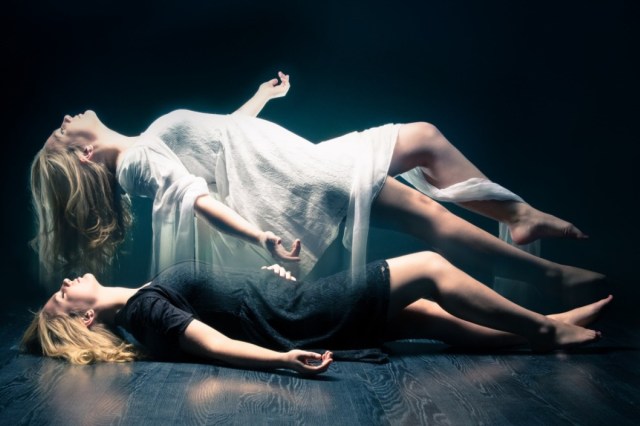 For centuries, people have documented “Out of Body Experiences” or Astral Projections; you know, when the spirit is said to leave the body and float above it on another plane. We’ve never really understood what could be responsible for these moments, but scientists at the University of Ottawa think they’ve finally figured it out.

The researchers tracked down a woman who is able to enter this “out of body experience” (or OOBE) state at will, and hooked her up to a brain scanner. According to their paper, published in Frontiers of Human Neuroscience, the woman saw herself floating in the air above herself, watching herself move while feeling completely unaware of her physical body.

While she was getting her float on, the MRI showed a deactivation of her visual cortex, while the part of her brain responsible for imagining body movement lit up. This particular portion of the brain is responsible for “kinesthetic imagery,” the thing that allows you understand how your body relates to the world around it. It seems that this particular combination of brain function allowed the woman to feel as though she was floating outside of her physical body.

With this new information on-hand, the researchers are saying that OOBEs are basically a very specific type of hallucination triggered by a certain neurological mechanism. While this woman can activate it by choice, other people who have claimed to have OOBEs have suffered from traumatic brain injuries, sensory deprivation, near-death experiences, dehydration, and other occurrences that could have potentially altered what goes on in their brains.

Sadly, this means your soul is likely staying firmly planted in your body for the time being, Astral Projectors. Better luck next time.

(via Sploid, image via Louish Pixel)