What Patton Oswalt Just Did on Twitter is Amazing 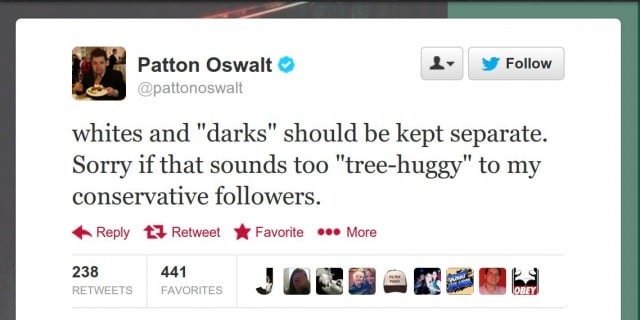 The above tweet is funny. I promise you. Out of context it looks like comedian Patton Oswalt decided to go on an Orson Scott Card level rant, but instead what he did was actually brilliant. Yesterday Oswalt sent out a string of tweets that pushed the limits of the medium, proving why he’s one of the best there is.

Yes. Patton Oswalt tweeted that whites and darks should be kept separate, but it was right after tweeting this:

When it comes to doing laundry, I firmly believe in using environment-friendly detergent and I ALSO believe

Get it? Essentially what Oswalt did was introduce a sort of Twitter diptych. He took the idea of needing more than 140 characters to express one thought, and used it to make shockingly offensive statements that aren’t actually shocking or offensive.

Here are a few more examples:

all abortion should be illegal, no exceptions. Just go ahead and UNFOLLOW me, you right wing hate-mongers. — Patton Oswalt (@pattonoswalt) August 17, 2013

Oh, you think repealing voting laws in the south is justified, you racist asshole? I suppose you ALSO believe that — Patton Oswalt (@pattonoswalt) August 17, 2013

Hitler was absolutely right about the Jews. And I don’t care how many “white power” redneck followers I lose by Tweeting that. — Patton Oswalt (@pattonoswalt) August 17, 2013

Why do right wing asshats want “Hollywood out of government”, but don’t want the Fred Thompsons or Arnold Schwarze

Neggers out of government? Yes, please! (Sorry for any misspelling)

And those are just some of the tamer ones. There are more over on Oswalt’s Twitter feed which you should all be following anyway. If you have any doubt about how great these tweets were, they seem to have sparked a #mancrush in Joss Whedon.