Fright Night: A Look Back At the Original 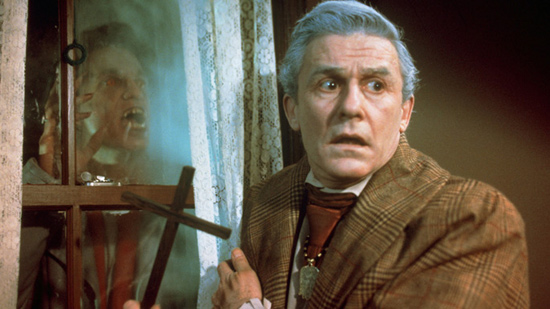 Ahead of seeing the Fright Night remake, which opened this weekend, I gave the 1985 film another look and came to this conclusion: not only does it hold up, but it is ripe for a remake. In a good way. A horror comedy about vampires is not a bad idea for a movie right now, and Fright Night provides just that kind of story. And even while zombies are having a moment, isn’t it about time we saw a genuinely predatory — but good-natured — vampire? Sharpen your wooden stakes, everyone — let’s go back to 1985. (Obviously, spoilers from the original are included, so consider yourself warned.)

One of the best parts about watching Fright Night was that even though it was made in the mid-1980s and the fashions scream “IT’S THE MID-1980S,” it doesn’t feel like you’re watching an ’80s movie. It’s hard to describe, but aside from one shot of a landline phone and the occupation of Peter Vincent (Roddy McDowall), the remake probably could have taken a lot away from the original script and still be fresh. This is a movie about a kid named Charley (William Ragsdale) who finds out that the handsome new neighbor, Jerry Dandridge (Chris Sarandon) is a vampire. A real, actual, bloodthirsty vampire who kills his houseguests. And no one believes him. Not his mother, not his best friend (a horror aficionado), not his girlfriend.

Like most 1980s horror movies, our lead male character has a girlfriend who is not that eager to sleep with him. Well, not at first. This is where Fright Night feels slightly different and more modern. Charley’s girlfriend Amy (Amanda Bearse) is reluctant at first to sleep with him, except that we meet them on the night she makes the decision that she’s ready. They’ve been dating for a year, she’s thought about it, and she’s ready. But Charley is too distracted by what is happening outside his window. And it’s a really funny moment, because here is this “typical ’80s horror movie couple” who is supposed to do something to wipe out their innocence and set themselves up for the evil to come … and the dude just can’t keep his eye on the girl in his bed. There’s something else happening that is way out of the ordinary, even more out of the ordinary than his girlfriend saying “I’m ready.” And after feeling ignored, Amy just leaves. (And then an awkward conversation in front of Charley’s mother ensues.) It’s a smarter and deeper relationship than we’re used to seeing in horror movies. But once the movie gets going, Amy doesn’t take a backseat as “the girlfriend.” She joins the mission to convince Charley that Jerry can’t be a vampire and then, once she finds out the truth, she tries to stop Jerry. It was awesome to watch Amy as not just a romantic interest-slash-hanger on, but as an equal member of the team. Even better for her character, she’s no sacrificial lamb. While she does get seduced and attacked by Jerry, she’s not the only one. Charley’s friend, “Evil” Ed (Stephen Geoffreys) is also attacked and becomes a true victim of Jerry’s, well, evil.

The best part is that none of these characters are dumb like typical horror movie throw-away characters. We know that Charley isn’t crazy, because we see what he sees. But even Amy and Ed don’t seem ignorant or stupid for not believing Charley — they just haven’t seen it for themselves. And as far as they’re concerned, vampires aren’t real. A perfectly rational thing to believe.

Which brings us to Peter Vincent. Pictured above is Roddy McDowall as Peter Vincent. This is one of the main reasons why I’m very curious about the remake. Not only because David Tennant is now playing this role, but because of how he’s going to play it. McDowall’s Vincent is a horror movie host/actor on cable who claims (on television) to be a real vampire hunter. He’s a fraud. He’s a meek, timid man who knows he’s past his prime, and when faced with an actual vampire, he’s only confident when he thinks the vampire is fake. He basically goes to Jerry’s house — after being pursued by Charley, and then by Amy and Ed — to prove that Jerry is not a real vampire and to get some cash out of it. Because he has been fired and evicted, and he needs the cash. But then he finds out that Jerry really is a vampire, and he resorts to all those legendary tricks — crosses, wooden stakes, etc. — only to discover that the cross thing actually works. Holy sh*t, vampires really can’t handle crosses (if you have faith, at least)!

But McDowall’s Vincent is certainly not what we’re seeing in the previews for the remake. Going purely by the previews, Tennant’s Vincent seems very sure of himself and ready for a battle, and not just to prove a vampire is fake. “Let’s kill something,” he says. Before seeing the movie, I don’t know if he’s just playing along with Anton Yelchin‘s character the way McDowall did with Ragsdale’s or if he’s deadly serious. (As serious as that eyeliner is, I just don’t have enough to go on here.) But even Vincent’s new occupation is a sign of the times — there are no horror movie hosts anymore like the first Peter Vincent. Now, Vincent is a rock star illusionist who likes horror movie imagery. He’s in a full costume in his showbiz persona, unlike McDowall. Tennant’s Vincent appears to be an even bigger fraud, hiding behind even more smoke and mirrors than McDowall’s Vincent. Again, this makes me even more curious about the remake. Who is this guy going to be? What’s his deal?

To say nothing of Jerry. Oh, Jerry. Yeah, it’s easy to be seduced by Chris Sarandon’s Jerry. Here is Jerry. 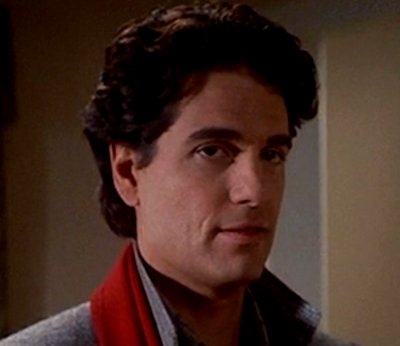 Sarandon’s Jerry comes across other-worldly, from a bygone era, from a more gentlemanly time. He knows vampires can’t come into a home uninvited, so he simply flips on the charm and heads next door to introduce himself. And then everybody dies. No, that’s not true. But if not for some punk kid who spotted him murdering someone else, everyone would die, because there’s no way anyone would turn down a guy like Jerry. But seriously, Chris Sarandon. He’s a great vampire, charming and devious … and primally dangerous. He doesn’t do much to make us like him because he doesn’t have to. He’s just really, really effective. It makes me wonder about Colin Farrell, who has kind of reformed his career after being known as one of Hollywood’s biggest horndogs/bad boys, then disappearing for a while before returning to play less flattering parts. Something that, after typing it, might make him perfect to play Jerry, because even while he bedded all those starlets, he was enjoying a great deal of popularity and success. But maybe it feels strange to see someone like Colin Farrell, who is so modern and “now,” playing a centuries-old vampire. Just going by how he’s dressed. I don’t think Sarandon’s Jerry would be caught dead in a plain white t-shirt and jeans. But then again, maybe Farrell’s Jerry is a much better chameleon than Sarandon’s Jerry. At least we know he’s very likely to be just as good-natured and funny.

So many questions about this thing! But even while I’m the first person to groan at the mention of a remake or reboot, I feel like this is one to be excited about. We’ve had to endure all kinds of “safe” vampires — I’m looking at you, sparkle vamps — and even though movies like Let the Right One In and its American remake Let Me In featured scary vampires, it’s been a while since we’ve been seduced by a good, scary, horror movie vampire. A truly mean, malicious murderer of a vampire … that we would totally allow to bite our necks.