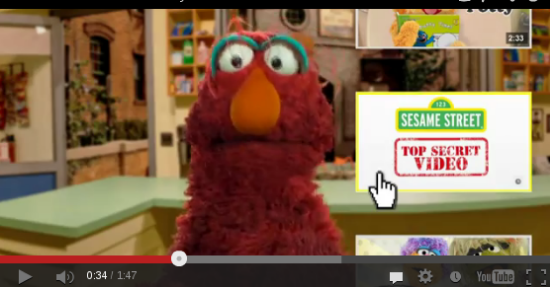 The world is a better place because of Sesame Street. It’s one of the most popular children’s television shows of all time. It also has a huge number of YouTube views. As of 1:26 pm today, the Sesame Street YouTube channel had 978,247,378 views, but 978,247,378 million views isn’t cool. You know what’s cool? A billion views. That’s the goal Sesame Street set for itself, and they’ve released a new video featuring Telly, who is the best, to help spread the word that when they hit one billion views they’ll release a “Top Secret” video.

To help get themselves over that billion view hump, Sesame Street has released this video where Telly gets very excited about a top secret video:

He wants to see that video so bad!

Not a lot of channels can claim one billion views. Psy’s “Gangnam Style” was the first single video to hit the number, and Lady Gaga and Justin Bieber each have passed the billion benchmark with their channels. Do you really want to live in a world where those three each have a billion views, but Sesame Street doesn’t?

Telly isn’t the only one dying to see this top secret video. I’m willing to bet it’s going to be pretty spectacular. So take a few minutes out of your day to watch some Sesame Street on YouTube. If your boss says anything, tell them Glen from Geekosystem said it’s fine. Then when your boss asks who Glen from Geekosystem is, throw a smoke bomb and use your escape hatch. Then go watch more Sesame Street.

I really want to see this top secret video.