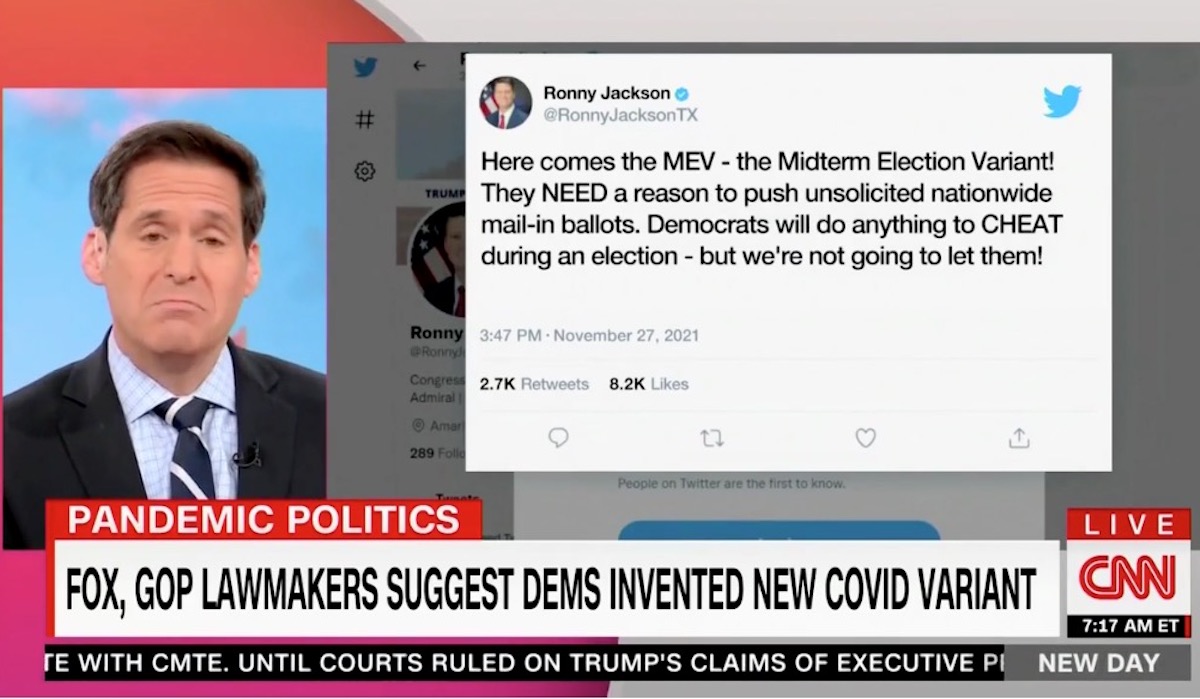 As the world grapples with the newly discovered omicron variant of COVID-19 and what it means for our health, safety, and holiday plans, some Republicans, conservative media figures, and a bunch of randos online are handling things the only way they know how: by coming up with a bunch of bonkers conspiracy theories.

Ronny Jackson, a Republican Congressman from Texas who also used to be Donald Trump’s doctor—the one who raved about Trump’s health, saying he could potentially live to be 200 years old—implied in a tweet that the variant was insignificant or possibly not even real. He called it the “Midterm Election Variant,” suggesting the variant is only in the news because Democrats “NEED a reason to push unsolicited nationwide mail-in ballots”

Here comes the MEV – the Midterm Election Variant! They NEED a reason to push unsolicited nationwide mail-in ballots. Democrats will do anything to CHEAT during an election – but we’re not going to let them!

There is still much we don’t know about this highly mutated variant, which was first discovered in southern Africa and has since popped up in confirmed cases across Europe and beyond. But to suggest that it’s a Democratic ploy to push mail-in voting is 100% removed from reality.

Unfortunately, this MAGA mouthpiece isn’t the only one pushing this idea. It’s also already made its way onto Fox News. On the show The Five, Fox contributor/guest host/former congressman/former Real World cast member Sean Duffy said Democrats “benefit” from COVID-19 because it allows them to “change election rules.”

“I think that if you look at the benefit of COVID for the Democrat Party, they won the last election based on COVID,” Duffy said. “They were able to change election rules. So made it far easier to cheat and potentially steal different portions of the electorate in the last election.”

And over on Fox & Friends, the show’s hosts speculated that omicron was made up by Joe Biden to distract from supply chain issues and that we can expect a new variant every October—the implication being that it’s merely a ploy to win elections.

Following up on Michael Flynn’s comments that “global elites” will be releasing a new variant soon, Fox hosts now suggest Biden will create and release new variants “every October” because he loves covid restrictions. pic.twitter.com/4OrldM4Zz5

On Monday, CNN political commentator S.E. Cupp called this conspiracy theory on the part of Republicans and Fox News hosts “evil.” And if you remember, they did this last year as well. Trump and others loudly predicted that Democrats and most left-leaning media would magically stop talking about COVID-19 after the November 2020 election. That, obviously, did not happen because the virus is a real thing that exists and not something created to scare people into voting by mail.

Perhaps the worst (or at least the most head-scratching) theory regarding the new variant comes from a bunch of conspiracists online, who have realized that “omicron” is an anagram for “moronic,” which they are taking as a sign that the whole thing is made up and that the CDC and the WHO and Democrats and whoever else is actively making fun of our concern and our belief that COVID-19 is a real threat.

In addition to being a hilariously coincidental Futurama callback, “omicron” is the 15th letter of the Greek alphabet. The World Health Organization made the shift earlier this year to using greek letters to label variants rather than the location where they were first detected because identifying these things by location can be “stigmatizing and discriminatory.” The WHO also decided to skip two letters—nu, which is too easily confused with “new” and xi, because it is a common last name, including the name of the current Chinese president.

And that’s how we ended up with the current omicron variant—a thing that does exist, regardless of elections, supply chains, and anagrams.