The Olympics, Women, & Arab Nations: What’s The Next Move? 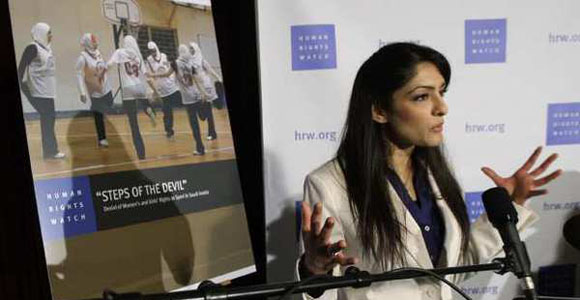 It’s just been announced that the Arab state of Qatar will be sending women to the Olympics for the first time when the games kick off in London this year. It comes after much debate from both the public and the International Olympic Committee over Middle East countries inclusion (or exclusion as the case may be) of women in games. But the fight is ongoing.

According to the Associated Press, “Sheik Saoud bin Abdulrahman Al Thani, the general secretary of the Qatar Olympic Committee, says the IOC has offered Qatar wild card invitations for two female athletes to compete in London — swimmer Nada Arkaji and sprinter Noor al-Malki.” There could be four women athletes from Qatar though when all is said and done. “Qatar, Saudi Arabia and Brunei have never sent women athletes to an Olympics. Qatar made its announcement Monday as it released details of Doha’s bid to host the 2020 Games.”

Sebastian Coe, chairman of the London Games, recently spoke with Reuters about the topic. He supports the move but is worried about pushing too hard. “I think you can use sport in a way to encourage social change at a sensible rate,” he said. “The world is diverse, it’s very complex, there are sometimes barriers that are not going to be broken down overnight.”

“The fact that women and girls cannot train to compete clearly violates the Olympic Charter’s pledge to equality and gives the Olympic movement itself a black eye,” Christoph Wilcke, senior Middle East researcher at Human Rights Watch, said in a statement, referring specifically to Saudi Arabia. The Gulf Arab state of Saudi Arabia and the small southeast Asian nation of Brunei are now the two holdouts as far as the Olympics go, though Brunei and Qatar have sent women to other international events.

According to a report by the Human Rights Watch, “[In Saudi Arabia] there are no national teams for women, and physical education for girls does not exist in state schools (although it does in private schools). Fitness clubs open to women are few and costly. Many of the swimming pools and running tracks that did exist for women were closed by the government in 2009 for being unlicensed, leaving women to search out gyms operating under the radar or to exercise at home.”

“Although Saudi laws derive from Islamic laws, there is nothing in the Koran that bans women from participating in sports,” writes the LA Times. “Some Saudi clerics have warned that sports could lead to women wearing immodest clothing and spending too much time away from their homes. Yet other predominantly Muslim countries, including Iran, Indonesia, Algeria and Bahrain, have sent female athletes to the Olympics.” The above image is of American Muslim athlete Sarah Kureshi, who spoke at the news conference held by Human Rights Watch last week in L.A.

The arguments come not just for equal rights issues but for health reasons as well. Obesity and diabetes rates have risen for women in Saudi Arabia. The “Human Rights Watch recommends that the committee bar the country [in question] from participation in the 2012 London Games unless the government lays out a specific plan and timetable for opening athletic facilities and supporting teams for women,” writes the LA Times. “This is not unprecedented. The committee banned Afghanistan under the Taliban from the 2000 Olympics because of discrimination.”

“Asked if the absence of women representing Qatar undermines the core Olympic value of equality, especially if the country were to host the Olympic Games, Coe said: ‘I certainly think that is something that the (International Olympic Committee) will be confronting.'”