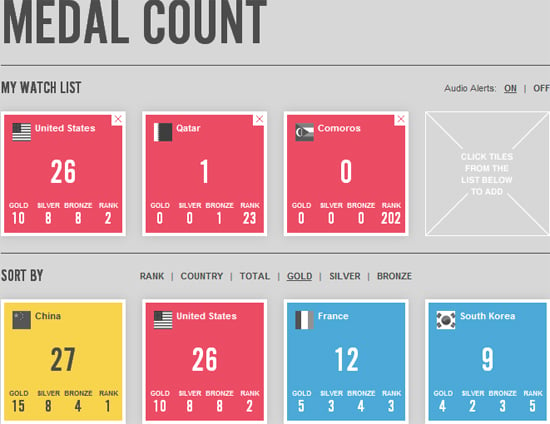 The London 2012 Olympics coverage can be a pain to keep track of on one’s own. That’s not even considering the time delay if you can’t manage to find a way to view the events live. Luckily, the good folks of ANIMAL have come to the rescue. They’ve crafted Medal Count, a nifty website with regular updates that keeps track of all the medals won by the various countries. Now, instead of watching the television delay, you can watch a slightly faster update in the form of spiffy icons.

The other alternative is to listen in on excited viewers over social media platforms. Nothing quite like learning about a Russian gymnast’s major mistake hours before you’ll actually be able to watch said mistake happen. Though Medal Count only exists to serve this singular purpose, it handily tallies all of the medals whilst providing a nice list of upcoming events just to the right. Those navigating the site can even add certain countries to their watch list — just in case they really want to know if Guam earns a medal.

The interface isn’t going to be winning any medals itself, but form fits function after all. A glorified list is still a list no matter how pretty you make it look. Besides, how else were we to learn that Uzbekistan won a bronze medal or that Slovenia’s only medal so far is gold? These kind of data points aren’t often the ones shared via television or social media.

(Medal Count via The Fox Is Black)