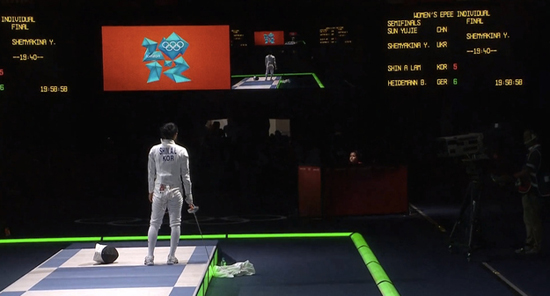 A timing error during the fencing semifinal at the London 2012 Olympics ended up causing Germany’s Britta Heidemann to squeak out a victory over South Korea’s Shin A Lam. The South Koreans appealed the process, but weird Olympics procedures required Shin to remain on the piste — the playing area — for over an hour whilst the appeal was deliberated. Now, this heartbreaking story has been told using LEGOs.

The result of the appeal eventually came back in favor of Germany and Heidemann, which only made the whole thing that much more horrifying. The two were tied at the end of the match and the timer was reset back to :01 for much longer than it probably should have been. This error allowed Heidemann to score the final point that launched her to the gold medal bout while Shin went on to lose even the bronze medal match.

The Guardian has recreated this  stunning event using the most expressive of artistic materials: LEGO. Watch as Shin’s LEGO miniature loses her chance too:

Suddenly, folks across the Internet have a number of feels hitting them. Shin’s stand will likely go down as one of the most notable aspects of the London 2012 Olympics.

(The Guardian via Deadspin, image credit via BuzzFeed)