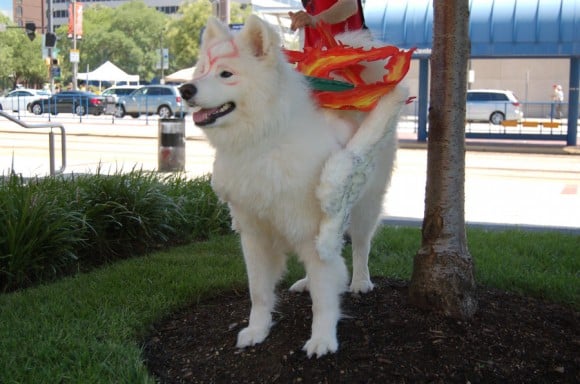 This is Dante, but you’d never know it: the Okami Amaterasu costume his owners made him for this year’s Otakon is so awesome. We’re probably not the only people who picked up Okami’s Wii rerelease because we liked the idea of playing a game where the main character was a godess whose ultimate goal wasn’t warfare (although she puts down a ton of demons) but destroying corruption and bringing nature back to harmony with mankind.

And you know what else is awesome? The thought process behind this costume. Dante’s human friends really put a lot of thought into it, from the initial concerns of whether Dante would be freaked out by the attention he’d receive, to whether he’d be made uncomfortable by the costume, and whether he’d rather just stay home.

(More pictures behind the jump.)

While planning our Otakon 2011 trip at the start of June, my wife semi-jokingly suggested bringing Dante. To our surprise, our roommates at the con were exctatic at the idea. Since this was better for him than leaving him in a boarding place for five days, it was decided.

I then decided that now would be the time to do a costume for him. The Amaterasu costume was perfect. Not too complicated, not too heavy, and popular enough to be quite recognizeable. 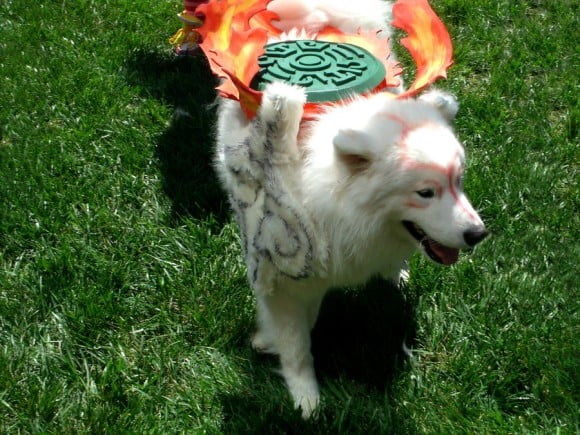 Dante’s owners stress a lot of other mitigating factors, should anyone think that Dante’s example proves that their own dog would make good cosplay, including that Dante is very friendly, docile, and enjoys attention; his sled-dog heritage means he doesn’t  mind having a harness on; they limited the amount of time he was exposed to con excitement and the time he spent actually in the costume; they used nontoxic food coloring pens on his fur; and that they closely watched him for signs of discomfort or stress through the whole deal. 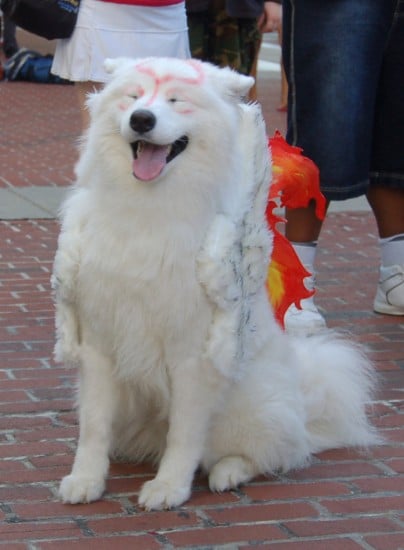 AND LOOK AT THAT FAAAAACE who’s the fluffiest goddess of the beauty of nature, rebirth, and the sun around you are YOU ARE.

To see the making of, and the careful way that Dante’s owners made sure that the costume and experience wouldn’t hurt him, see their blog about it.

(all pics via volko-dav’s DeviantArt, story by Joystiq.)