Ohio Girl Scouts: No Cookies Until We Get to Pee in the Woods 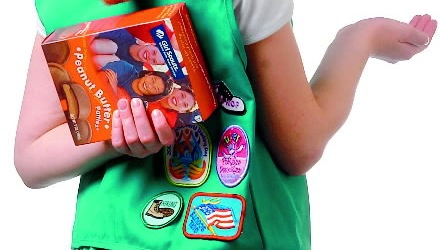 Some Girl Scout groups of northeastern Ohio will be refusing to sell their eponymous cookies this year. It is apparently a last resort protest tactic, that follows a campaign of petitions, correcting misinformation, appealing to the Girl Scout organization at the national level, and even camp-ins; everything to “[work] through the democratic process.”

What’s the cause that has rallied kids and mothers together alike?

They’d like to keep roughing it when they go to Girl Scout camping sites… and that includes peeing in the woods. Okay, we admit that we posted this because we couldn’t resist the title opportunities.

According to Rebecca Shaffer, director of marketing and communications for the Girl Scouts of North East Ohio, when Scouts in her organization’s jurisdiction were surveyed a few years back,  “the number one response to our questions about what they wanted [improved in the camps] was more inside plumbing.”

But the survey was apparently not quite that representative (or opinions have changed somewhat), and there are a lot of Scouts out there who like their camping rugged as it gets, thankyouverymuch.

“The council management has forced the cookie boycott by turning a deaf ear,” said Lynn Richardson, organizer of Trefoil Integrity, an organization working to keep the existing campsites open without renovations, adding “that it is up to each individual Girl Scout to decide what to do. ‘The girls boycotting are the ones who still have hopes that the board will change.'”

“Half of the girls in our troop made the difficult decision to not sell the cookies this year,” said Alisha Trammell, a Girl Scout troop leader in Cleveland Heights.

Trammell says her troop raised about $800 last year through the cookie sale and she realizes this year they will not have those same funds to use for activities.

“We’ve talked to the parents and they are very supportive of what the girls are doing,” she said. “They know we might have to do less this year.”

The majority of the $4 price tag on each box of Girl Scout cookies goes to fund whatever regional Girl Scout sub-organization that a given troop belongs to, in this case the Ohio Girl Scout Council, who Trefoil Integrity is hoping will be pressured by the prospect of lacking funds, but parents and Scouts are well aware that less cookies sold also means less money for their individual troop (about 60¢ on each box goes to the troop that sold it).