When it doubt, cute things. 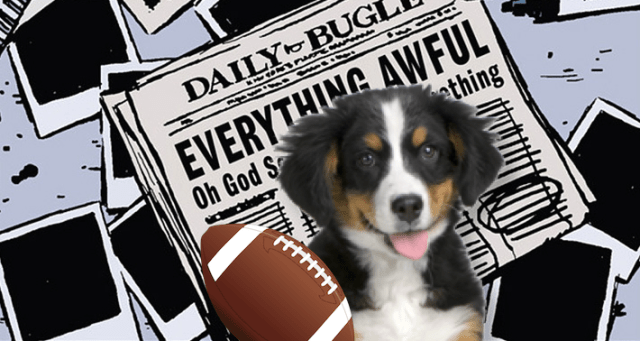 Did the world seem just a little more terrible when you first checked the news this morning? We know the feeling. While we’ll no doubt hear more about the Charlie Hebdo shootings, the NAACP office bombing, and whatever new awful’s going on at 8chan in the days and weeks to come (just in time for another horrific tragedy to occur, of course), please know that there’s always a place to retreat when it all feels too overwhelming: the Animal Planet Puppy Bowl.

if you’re unfamiliar, Puppy Bowl is a yearly event opposite the Super Bowl in which lil’ baby doggies of all different breeds are filmed in a fake stadium running around and playing with each other while a beleagured young man in a referee costume attempts to make calls as if it were a real American football game. There is usually a halftime show where  kittens mostly ignore overelaborate floats covered in springy toys. It is astoundingly cute, as evidenced by this clip of 2013’s contenders:

Yesterday, Entertainment Weekly got the scoop on what to expect for this year’s Puppy Bowl XI, which will feature an exclusive halftime appearance by Katy Furry (Because the name Kitty Purry is already taken, of course), aerial footage from “hamsters flying a biplane made of Twizzlers,” and goat cheerleaders. Did you take the time to properly picture that in your head? Goat cheerleaders. I’m going to start using that as a mantra. Goat cheerleaders.

But wait, don’t go back to the cold unfeeling outside world just yet! EW also introduced us to four puppies from the 55-strong line-up—half on “Team Ruff,” the other on “Team Fluff”—and they are adorable. Here. Look at them. Really take some time to imagine how soft their fur would feel on your fingertips. It is our gift to you. Enjoy, and take care of yourselves.