Coming To New York Comic Con Next Week? Party With The Mary Sue & Her Universe!

UPDATE: The party is moving to The Beer Authority. The address is 300 west 40th street. Come see us! 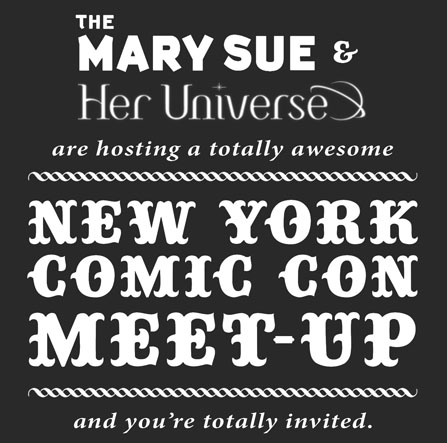 It’s true! We’re coming to New York Comic Con 2012 and we want to meet you! What better way to do that then by hosting a party with HerUniverse.com‘s Ashley Eckstein, voice of Ahsoka Tano in Star Wars: The Clone Wars! Want to join us? Hit the jump to find out how!

This will be our 2nd annual NYCC meet-up and we hope you can come! Here’s the details: 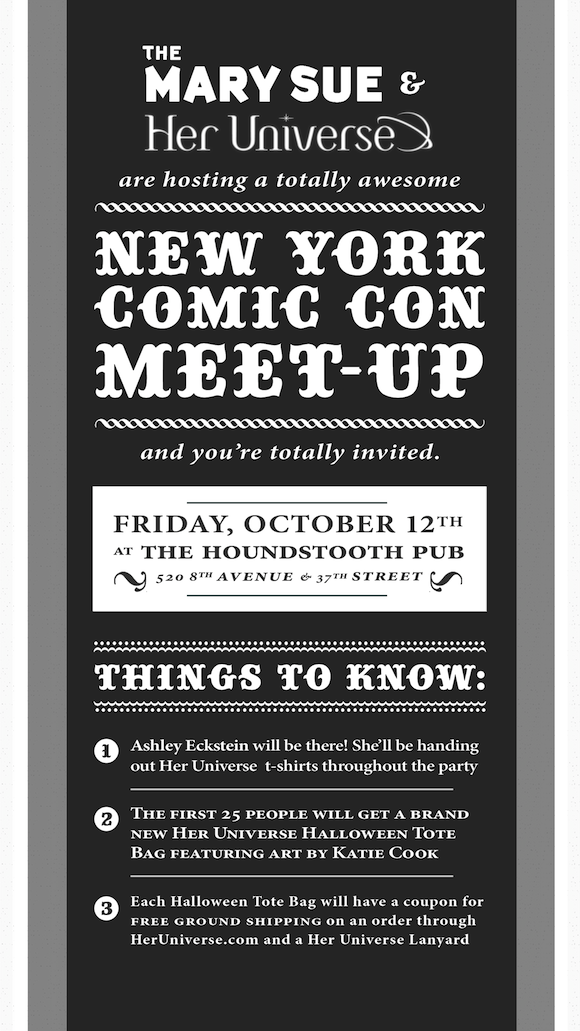 The happenings start at 8 p.m. and The Mary Sue staffers, Susana, Jill, and Rebecca, will all be in attendance (I’ll be heading over after my 9 p.m. Psychology of Cosplay panel!). We’ll keep going until we’re all tuckered out. We’re super excited to see you all and thrilled to have HerUniverse.com onboard because we can’t get enough of their sci-fi merchandise for women and girls. Hope to see you there!

The Mary Sue hopes to be a place for two things: highlighting women in the geek world, and providing a prominent place for the voices of geek women.  Because all we really want is to just be able to geek out with all geeks, of any gender, without feeling like our femininity is front and center for scrutinization.  To not feel like we have to work harder than guys to prove that we’re genuinely into geek culture. We want simple things, like to be able to visit a comic book store without feeling out of place.  To be able to buy a video game without getting the sense that the cashier thinks we’re buying it for someone else.

Her Universe is the vision of Ashley Eckstein, actress and voice of Ahsoka Tano in Star Wars: The Clone Wars.Together with her partner, The Araca Group, they founded this new company to create merchandise for female sci-fi fans. Her Universe is a place for fangirls to step into the spotlight and be heard, recognized and rewarded. Female sci-fi fans are growing in numbers and have largely gone unnoticed until now. Hoping to change the perception that science fiction and fantasy is not just for the boys, Her Universe, has joined forces with Lucasfilm and Syfy to create merchandise exclusively for female fans. Starting out with apparel, accessories and cosmetics, Her Universe will make fangirls “geek chic” from head to toe!