The Best Cosplay We Saw at New York Comic Con 2013 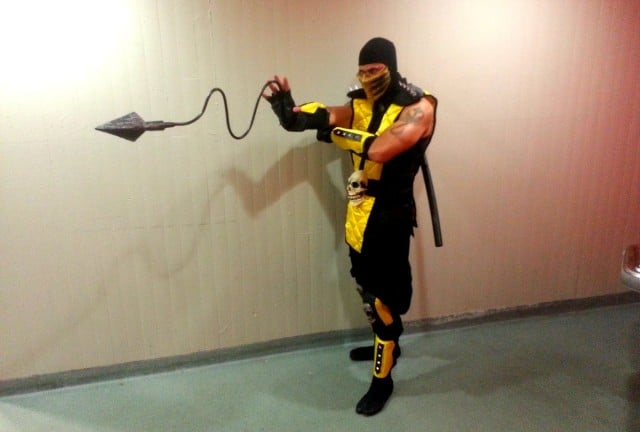 Cosplayers were out in full force at New York Comic Con this year, and if you follow us on Instagram you may have already seen some of the great pics we’ve shared from the floor. Here’s a quick roundup of some of our absolute favorite costumes from the con. Ready? GET OVER HERE!

Bioshock Infinite is a game known for its attention to detail, and it looks like that translated over into these fans’ costume.

This is the insane clown you’re looking for

Maybe things didn’t work out with “Mista J” so it looks like Harley’s moved on.

Here’s a great pair of cosplayers as Luke and Anakin from Jedi, ruling the floor of Comic Con ad father and son.

We hope security checked that umbrella

The Penguin is a great costume for anyone looking to hit Comic Con and then catch a performance at the opera later that night.

Sure, this costume is just a paper mache helmet, but it’s combined with an accordion. Sure. We know Boba Fett doesn’t play the accordion in a canonical sense in the Star Wars universe, but this guy rocks, and won us over instantly. (We have a soft spot for accordions.)

We don’t know what this costume is. We do know that we saw this guy on the street outside the con he wasn’t interested in talking about it, so we labeled him “Grumpy car man.” He’s more machine now than man. Twisted, and grumpy.

There wasn’t exactly a shortage of Captain America cosplay this year, but this one was our favorite. Come on, look at him. You wouldn’t follow that guy into battle against the Red Skull?

To infinity and beyond?

Another recurring category in cosplay is “Sexy ______” This is the first sexy Buzz Lightyear we’ve seen, and it’s a lot of fun. Imagine a bizarre alternate universe Toy Story where Buzz and Woody are Vegas showgirls.

Oh sure, there were a whole lot of Heisenbergs roaming the floor, but this is some next-level Breaking Bad cosplay.

We were just talking about this at Geekosystem headquarters after the first night of the convention. Folks dressed as Deadpool are a common site at conventions, but we’ve never seen anyone take it to the next level — mask off Deadpool. That is, until this weekend.

We saw a lot of Gandalfs this weekend, and they were all elaborately detailed. When we happened to find three of them together it was too perfect not to snap a pic.

We saw a few Mortal Kombat costumes out on the floor, but the added touch of a mid-throw-harpoon prop to this guy’s Scorpion made it perfect.

Sailor Moon characters with Storm Trooper helmets? It might just be crazy enough to work. (It works.)