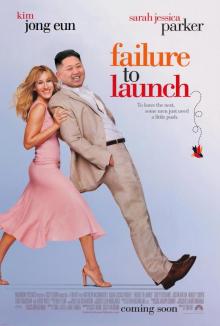 In the run up to the launch of North Korea’s Unha-3 rocket and the satellite it carried, there was a surprising amount of candor from the isolated nation’s government. The public and foreign press were invited to view the rocket on the launchpad, and some journalists even toured the control room that would organize the launch. It would all prove in vain as minutes after today’s lift off, the rocket’s second stage failed to ignite and the spacecraft crashed into the Yellow Sea.

Reports indicate that that first stage of the three stage rocket fired for about 100 seconds, sending the rocket some 94 miles into the air — well short of the 310 miles needed to place a satellite into orbit. It’s believed that some kind of internal explosion then occurred, as multiple pieces of wreckage were believed to have crashed into the water. From the Daily NK:

Shin Sung Taek, a visiting research fellow with the Korea Institute of National Unification (KINU) predicted, “There was probably a huge internal explosion even before the separation of the first and second stages. The fact that it broke into 20 or so pieces of debris would have been because there was an internal explosion.”

Experts in South Korea say that the cause of the explosion would have been due to imbalances between the injection of fuel and the engine burn. There will have been a problem in the control device which connects the engine and fuel, they claim.

This differs from North Korea’s failed attempt to place a satellite into orbit in 2009. In that case, the Unha’s second stage fired but the third stage failed to separate, which caused the rocket to crash into the Pacific ocean.

In a surprising move, North Korean officials confirmed the failure of the rocket launch some four hours after it failed to reach orbit. This is in sharp contrast to their 2009 launch, which despite overwhelming evidence to the contrary, North Korea continues to maintain was successful. The same is true of the country’s 1998 attempt to place a satellite into orbit, which has not been verified.

The admission of failure may stem from the coverage of this particular rocket launch as it has been tied closely with the ascension of Kim Jong-un as the leader of North Korea after the death of his father, Kim Jong-il. Not only that, the rocket launch was meant to commemorate the 100th birthday of Kim Il-sung, North Korea’s founder. With so many eyes on the launch, it’s possible that the North Korean government did not feel it could simply claim success as it had in the past.

While the failure of the rocket launch may set international tensions momentarily at ease, attempting to launch the rocket at all has been the cause of much concern. Though North Korea claims the rocket would have placed a satellite into space to broadcast songs about the country’s great leader, the international community has viewed the launch as an aggressive act. The U.S. government had previously stated that since it viewed the rocket launch as a missile test, it would cut off food aide intended for the country.

However, the failure of Unha-3 may have even more disquieting consequences. In the absence of a rocket launch to assert North Korean power at a time of national celebration, some analysts believe that the country may then opt for the next best thing: A nuclear weapons test.

“Now it has become more certain that North Korea will raise tensions and go ahead with its third nuclear test to recover some of its lost face, especially if the United States pushes for more sanctions,” said Cheong Seong-chang, an analyst at Sejong Institute. […]

One Obama administration official suggested that the failure might speed the North’s determination to conduct a nuclear test — the country’s third — “simply to show that it can.” Test preparations are under way, satellite photographs suggest.

The loss of Unha-3 is not only a blow to the pride of North Korea — whose strange mix of mythology and politics places enormous emphasis on propaganda displays — but also an enormous economic loss. In their report, the New York Times estimates that the Unha-3 rocket and its satellite payload cost the North Korean government some $450 million, in addition to a new $400 million launch platform.

The next move by the erratic nation should prove to be an interesting one.