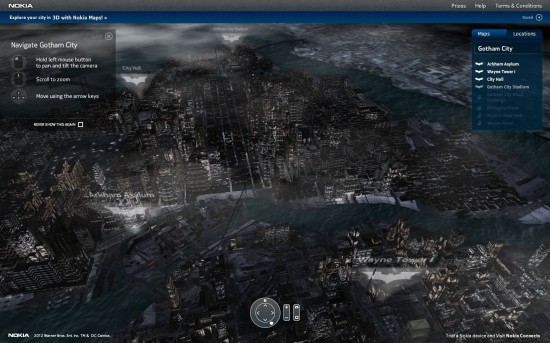 Nokia‘s marketing campaign with The Dark Knight Rises has just reached new heights with the launch of its 3D map of Gotham City, and here it is in all its glory. Seriously though, that’s as far as the zoom goes, so it’s not actually a map like Google Maps.

The Flash-based site makes you log in on Facebook and like the Nokia page before letting you access the map. Once in, you get to see Gotham City at night in 3D and pan and tilt and move all you like in its sparkly prettiness. So far, there are only 4 locations you can visit, all of which are marked with a Bat-Signal. 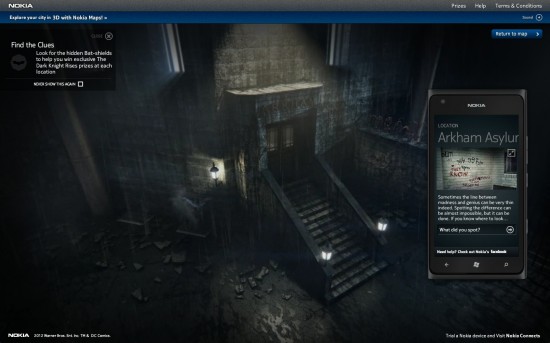 I was expecting something like Street View to happen when I clicked on the markers, but no. The art is gorgeous though, so all is well. At each of the locations, you’re told to locate a hidden Bat-shield that will reveal a question that you need to answer to win a The Dark Knight Rises Limited Edition Lumia 900 and some other stuff. The Bat-shields aren’t very hard to find, and though the answers aren’t very Google-friendly, the quiz links you to Nokia’s Facebook page for help. All the answers are there, except for the one for Gotham City Stadium. Ha!

Of course, this is still all just advertising, so there’s a link up top that takes you to Nokia Maps which (surprise!) is something sort of like Google Maps. 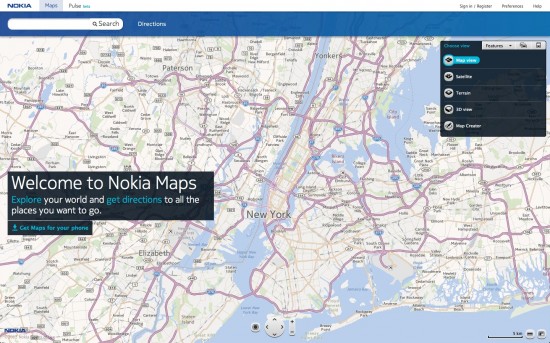