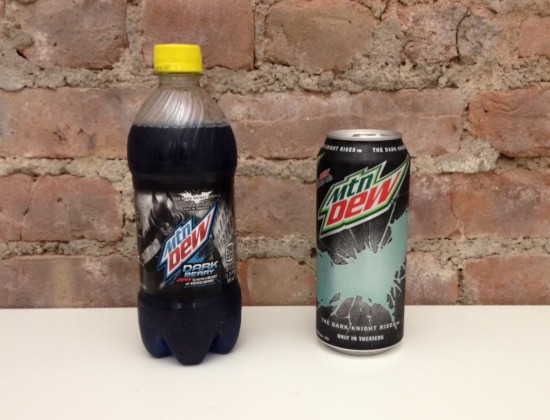 We recently received a black box with green lettering here at Geekosystem HQ. They must have known our color scheme. Upon further examination, it was for a collaboration between Mountain Dew and The Dark Knight Rises. The box houses a bottle of Mountain Dew’s new Dark Berry flavor, and a thermo can for the original neon green flavor. Of course, we were eager to put the new liquid to our palettes, and we recorded the results.

The box came with one bottle of the new Dark Berry flavor, and a thermo can with the original flavor. The thermo can is like one of those beer cans where a pattern turns a different color when it gets cold. In this can’s case, the bat symbol turns a kind of metallic green.

We gathered up most of the Geekosystem team and tried out the new Dark Berry flavor, exercising our obviously refined palettes. Here’s what we thought.

Eric: It smells almost exactly like grape Kool-Aid, and a little bit like Sprite. Sip test is virtually indistinguishable from several other versions of Mountain Dew. If I were closing my eyes, I wouldn’t know that I was drinking Mountain Dew that is blue. I taste something a little grapey three or four seconds after the fact.

Justin: Smells like blue, like a blue raspberry Blow Pop. It taste like that Blow Pop, but a soda. Yeah. Tastes like candy. I wouldn’t want to drink a whole bottle, but I would. It’s like the amount of flavor of a cough syrup. It has a Smarties aftertaste.

Max: Smells like blue raspberry flavored candy dust, like Dippin’ Stix. It really just tastes like regular Mountain Dew. At first I was confused, my mouth was like, “What is this? I’m really interested in this,” but then it was just Mountain Dew. There’s a suggestion of a faux berry flavor, but I can’t tell if that’s the psychological priming of drinking something that is blue. It smells like what is left in wild berry Squeeze Pops once the cup is empty.

Ying: This is what I assume Oompa Loompa pee tastes like.

James: Certainly smells like blue. You know the smell. It tastes like regular Mountain Dew, but with a subtle taste of blue raspberry, which is weird, because the other variant Mountain Dew flavors taste more strongly like something unique to the brand. We had regular Mountain Dew for comparison, and Dark Berry tasted pretty similar to the neon green original, though with that subtle berry taste. I actually quite like it, but I tend to gravitate toward drinks overloaded with syrup.

If you’re interested in the new flavor or the promotion, check out this page.