Because fan theories and headcanons are fun. 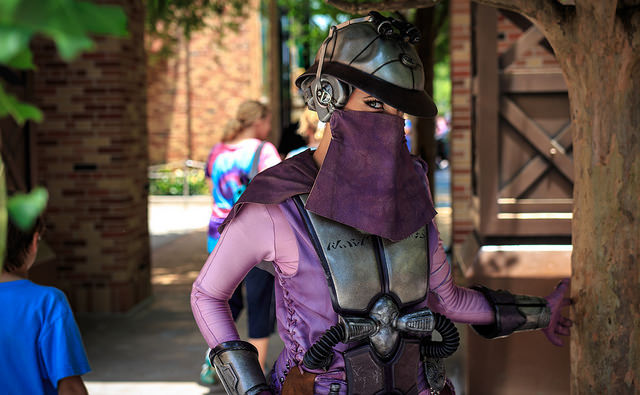 Noelle Stevenson, creator of Nimona and Lumberjanes and all around general badass artist/creative inspiration, developed a pretty neat headcanon/fan theory about Boba Fett that we’re utterly fascinated with. It has to do with Jango Fett, Boba Fett, and the really cool shapeshifting bounty hunter (and one of my early Star Wars crushes???) Zam Wesell.

Unlike the more popular fan theories/canon out there about Boba Fett, which mostly focus on his life post-RotJ, this one focuses on his childhood and quasi-parentage. You should check out the full post, because Stevenson does an excellent job of presenting all the appropriate evidence, but if you’re curious for the tl;dr version, then read on, nerf herders.

The crux of Stevenson’s headcanon lies in this one, often overlooked fact: Thanks to the efforts of Kamino bio-engineers, the galaxy is absolutely littered with perfect clones of Jango (and technically Boba) Fett. Since it isn’t explicitly stated that the Boba Fett we’re introduced to in the original trilogy is the same child we see in the prequels, the person under that mask could be anybody. According to Stevenson, that person is none other than Zam Wesell, who she suggests faked her death during the events of Attack of the Clones.

Stevenson pulls in evidence from a lot of the comics and video games that focus on Jango and his relationship with Zam. They’re presented as friends-slash-possibly-romantic-interests in a lot of the source material. Additionally, Jango bails Zam out of many a jam (ha), so for him to kill her in cold blood when she’s being interrogated by a Jedi seems incorrect.

After a few suggestions and suppositions (seriously, you really should read the whole theory on her Tumblr), she concludes that Zam Wesell acquired Jango’s armor somehow and, well, since she’s a shapeshifter, has taken his place as a way of hiding. The real Jango and Boba are elsewhere in the galaxy, having essentially used up all their “extra lives” (read: clones).

When you add in Star Wars‘ recurring theme of using clones who think they’re the real thing, it’s easy to see that there’s an edge of possibility here.

Whatever you might believe about the galaxy’s greatest bounty hunter (sorry IG-88), we’ll likely get a Boba Fett origin story in the currently planned Star Wars Story/Anthology that’s said to focus on Boba Fett himself. No word yet on whether they’re calling it The Mandalorian Candidate. (Thanks, Dan.)

What do you think? Is this a headcanon you can adopt? Why? Why not? Come on, just do it. You know you want to.