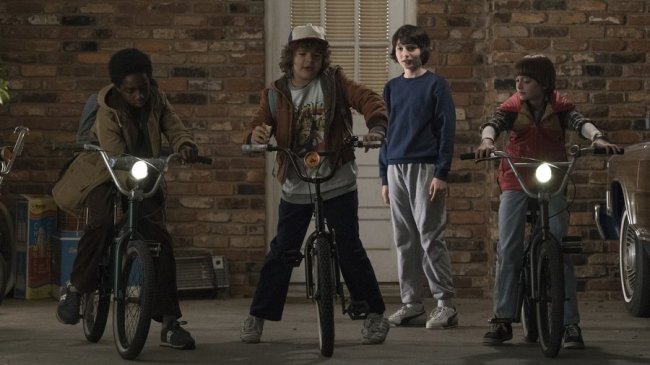 [The title is pretty self-explanatory, but Stranger Things season 1 spoilers ahead]

Season 2 of Stranger Things has many, many questions to answer. Are Nancy and Steve still together? What’s going on with Eleven, is she really gone? Does Mr. Clarke know way more than he’s letting on? In an interview with The Hollywood Reporter, Noah Schnapp discusses auditioning, being close to the other child actors and Winona Ryder, genuinely being scared by the Demogorgon, and his other roles in Bridge of Spies and The Peanuts Movie.

Just as we’ve been speculating on what the second season based on new characters descriptions and episodes titles, Schnapp has some theories of his own. In the final episode, Hawkins seems to be back to normal. Will is back with his family, where he belongs. However, in what Schnapp calls one of the “grossest” moments of filming (the other being his time covered in goo in The Upside Down), Will excuses himself from dinner to puke some slimy monstrous slugs into the sink and visions of The Upside Down return. While the actor doesn’t know where the story goes from there, he shared his prediction:

Schnapp also talked about how frustrated he was at Will in that final scene:

When I was filming the scene, I was so angry. I wanted Will to tell Joyce so badly! I wanted to see what she would say after. But he hid it from her. So I had to play it like I’m keeping it to myself, where I’m trying to hold it in, where I’m very scared, and I don’t know what’s going on.

Stranger Things is full of talented child actors (cue Daniel Radcliffe adorably gushing over them) and I definitely recommend reading the full interview as Schnapp comes across as incredibly excited and humble. Combined with how Will is, according to Schnapp, the “heart” of the group I’m very curious to see what an “evil Will” might looks like. We’ll have to wait to see what the long-term effects of The Upside Down are, but what do you think about Schnapp’s theory?