Kevin Spacey’s Contract May Keep Netflix From Doing House of Cards Without Him … and Honestly, That’s OK 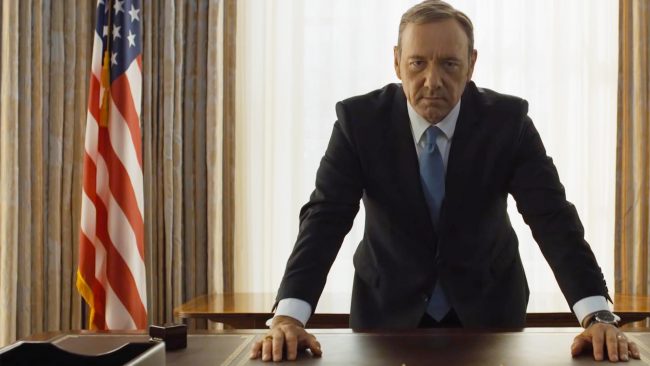 So, remember that time when we told you that Netflix wasn’t going to continue with House of Cards with its current star, Kevin Spacey, but were still exploring their options on how to continue with the show? Well, as it turns out, there might not be any options after all.

As reported by The Independent, Spacey’s contract may not allow Netflix and House of Cards‘ production company, Media Rights Capital, to go on with the show at all if it means going on without him. At least, not without paying him a significant chunk of money.

An unnamed source reveals that Spacey’s contract doesn’t have a morality clause, which means he’s unable to be suspended or terminated from the series as a result of being an abusive human being. The source suggests that Spacey’s contract states he can only be fired from the series should he become “unavailable” or “incapacitated.” Great, so he can be harmful to others on the set, and that’s not grounds for a firing, but “becoming unavailable” (which means he willingly wouldn’t be able to do the show anyway) or “becoming incapacitated” (which, unless he was coming to set drunk or high, would likely happen through no fault of his own) are?

So, according to this contract, actions aren’t fireable, only unforeseen circumstances? Who wrote this up and signed this?

What has yet to be determined is whether or not “incapacitated” or “unavailable” would encompass his current “evaluation and treatment” in Arizona.

Again, I can’t imagine that a contract exists where actively harming employees on your set isn’t a fireable offense. That’s, like, Keeping Your Job 101. “Don’t harm your co-workers.” Then again, this is Hollywood, and men have been getting away with harming their colleagues since the days of silent film, and while I believe in the ideals of our justice system, that system is flawed. It’s set up to protect those in power more than it is to actually deliver justice. Contracts are a part of that, and I’m sure Spacey’s representation worked long and hard to ensure that a contract was drawn up that would cover the ass of their abusive client.

Honestly, this isn’t terrible news. I stopped watching House of Cards in the beginning of its most recent season, because I was so damn bored, and I know that I’m not the only viewer who thinks that the show has overstayed its welcome. If this is the end of House of Cards, I won’t lose much sleep over it, except for all the people who depend on the show for a job.

If I were Netflix, what I’d do is create an entirely new show around Robin Wright, and employ everyone else currently working on House of Cards on that show. Why should Spacey’s actions impact the lives of all those people? Surely some writer somewhere out there has a show worthy of Wright’s talents. Make that show, and I will happily watch.