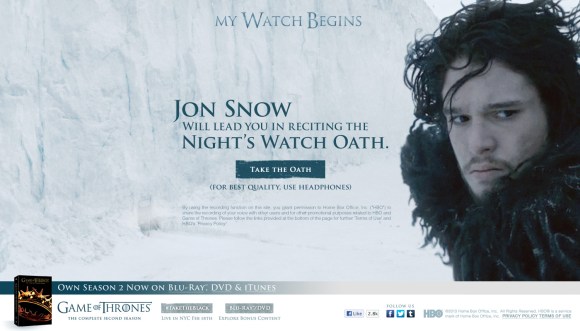 If you ever thought about joining The Night’s Watch, now’s your chance. HBO has set up a new website where fans can join an “oath chorus” led by Jon Snow himself, Kit Harington, for a large-scale vocal recording of Game of Thrones fans.

If you’re game, head to MyWatchBegins.com. There you can listen to the oath and add your voice to the mix. Here’s how it works:

You have from now until February 18th to participate. On the 19th, HBO will premiere the full chorus of fans reciting the oath in celebration of the Season 2 DVD/blu-ray release. And you might want to keep track of the Game of Thrones Facebook and Twitter accounts, looks like they may be playing the whole recording live in New York City.

I just tried it out for myself and had to re-record because the first time I managed to slip into a British accent. It was pretty ridiculous, but fun.