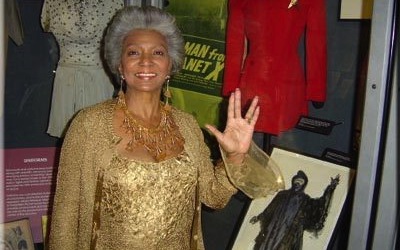 Rod Roddenberry (son of Gene Roddenberry)’s documentary Trek Nation, which aired this Wednesday, was filmed in as a son’s pursuit of discovering what made his father famous, after spending years resisting the Roddenberry legacy and the fandom that surrounds it. But, in the middle of a Huffington Post interview with participants in the documentary, there’s something we’ve certainly never heard before in the statements of Nichelle Nichols. Namely, that she was asked to read for the part of Spock.

Nichols recalls the day she was interviewed for this new television series called “Star Trek.”

“They gave me a three-page script to read from that had three characters named Bones, Kirk and somebody called Spock, and they asked me if I would read for the role of Spock. When I looked at this great text, I said to myself, ‘I’ll take any one of these roles,’ but I found the Spock character to be very interesting, and I asked them to tell me what she [Spock] was like.

This makes more sense than you think, as Spock was originally intended to be a female character. That is, there was a vulcan on the crew, the head science officer. There was also a female character known as Number One, a cold, efficient and logical woman to play against the hot headed, libidinous Kirk. She was intended to by played by Majel Roddenberry, then Majel Barrett. Gene Roddenberry was dating her at the time, but hadn’t yet divorced his estranged wife. The studio producing Star Trek was uncomfortable A) with a woman as such a central character and B) with the scandalous nepotism of the whole thing. They also didn’t particularly like Spock as a character, and so as a compromise Roddenberry eliminated Number One, made a Spock the emotionless one, and promoted him to First Officer. Majel got the more secondary role of Nurse Chapel.

We like the idea, however, that somewhere out there there’s a parallel universe with an African American lady first officer on a sci-fi show in 1966.

Nichols also talks about the changing image of science fiction over the years:

And finally, it’s a story we’ve heard before, but Nichols talks about finding out the Martin Luther King, Jr. was a fan of the show, and how it convinced her not to leave the production.