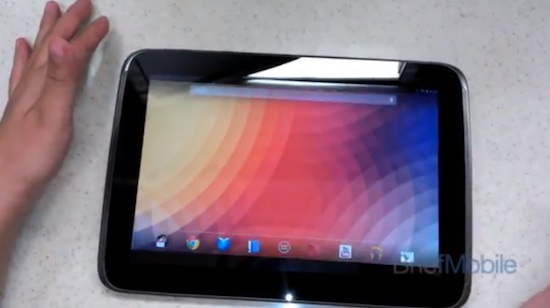 As sad as it is that Google had to cancel their media event for tomorrow on account of Franken-Sandy, it may not be that big a loss, since most of things they planned to unveil seem to have already popped up online. First, the Nexus 4 smartphone was revealed after somebody left one at a bar. Now a video of another of Google’s flagship Nexus devices, the rumored Samsung-built Nexus 10 tablet, is giving Android fans an extremely short sneak peek.

The Nexus 10, if you haven’t heard of it, is Google’s first attempt at going directly toe-to-toe with the iPad. Though there have been plenty of Android tablets with screens of all shapes and sizes, Google themselves have only had a hand in designing one, the Asus-made Nexus 7. Now, as Apple moves into the seven-inch tablet market with the iPad Mini, Google is preparing to take the fight to Apple with a “full-sized” model of their own.

The upcoming tablet might look familiar if you’ve seen or tried Google’s Nexus 7 tablet: As some rumors have implied, the device looks like a bigger version of the device. If you needed proof that Google plays a large role in designing these devices, the similarity between the Nexus 10 and the Nexus 7 is pretty good evidence that Google has its own distinctive sense of style.

To be fair, confirming existence of the Nexus 10 isn’t exactly huge news. Just like with the Nexus 4, a lot of information about the tablet has already come to light. The alleged manual for the device, for example, was particularly revealing. At just five seconds long, the video doesn’t really have time to reveal anything new. It’s just here to say; “Yes, this thing is real.”