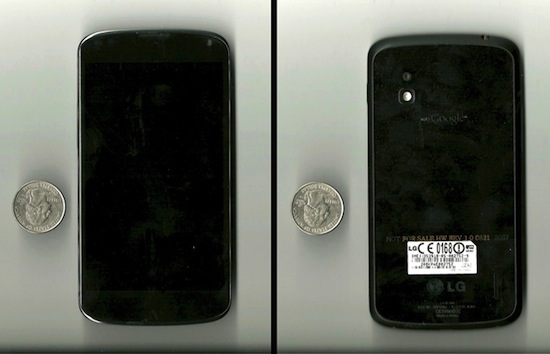 So have guys heard the one about the smartphone, the stalker, and the guy from Google? It might sound familiar: It’s almost exactly the same as the one about the tech site and the lost iPhone, but with Google instead of Apple… Apparently, a Google employee (most likely) was field-testing the Nexus 4, the de-facto official Android smartphone supposedly being designed by LG, at a bar in San Francisco last month, and left it there. By the time they figured out it was gone, a couple of people had already found it, revealing the phone’s existence and Google’s unfortunate slip-up.

If you haven’t heard of the Nexus 4, it’s an all-but-confirmed smartphone (allegedly) being made by Google and LG. Similar to the Nexus 7 tablet, Google’s involvement in the project will make the phone the “official” top-of-the-line Android smartphone. According to multiple tech outlets, the phone will most likely be revealed to the public at a Google press event on Monday. (UPDATE: Google has cancelled the Nexus 4 announcement event due to complications from Hurricane Sandy.)

So here’s how it happened: Whoever lost the phone was drinking at the 500 club, a bar in San Francisco’s mission district, and left the phone behind. It was picked up by an unassuming bartender, who might not have realized it was something special had it not been for the fact that it had it was branded with the Google logo, had no SIM card, and came witha big “NOT FOR SALE” sticker on the back.

After confirming that what the phone was with a customer, who agreed to contact Google so they could come get their phone back. Google, being a massive corporation and not a human being with common sense, threatened to sue everybody if they didn’t give it back and sent their security team to retrieve the phone. The bartender, freaked out, when he realized he was being stalked, was hesitant to give the phone over when approached because the man, a Google security official, refused to confirm that he was sent by the company. In the end, Google got their phone back. They offered the bartender a free phone if he agreed to keep quiet about it. Clearly, he didn’t take them up on their offer.

Why do companies like Google and Apple test their phones in San Francisco, where almost everyone works in the tech industry? Why can’t they give these things out to employees where a lost phone would most likely remain unrecognized?