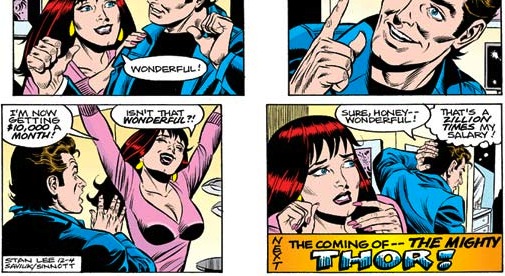 There’s something to be said for print media’s ability to bring comics to the masses. Even though comics pages around the country are falling by the wayside as print media tightens its belt against online news outlets and the recession itself, it’s a safe bet that the easiest, earliest way that most kids are introduced to sequential art in America is through the sunday funnies. It’s in the newspaper that their parents buy or get delivered every day that kids pick up the basics of reading comics (neither quite the same as reading books or looking at a drawing), and it’s because these comics have such a wide audience that there can be an enormous hullabaloo whenever a strip writer tries to do something edgy. Just look at the backlash nightmare (amounting even to death threats) against Lynn Johnston for including a gay character’s coming out story in For Better or For Worse.

So, if we’re heavily editing newspaper comics for the children, maybe we can edit out the plots where their hero makes his wife feel guilty about making more money than him?

Yes, this is the Spider-Man comic where Peter Parker regularly does things like going on a long awaited vacation and realizing with a shock that his costume is in his luggage, which has to pass through an x-ray machine. Or attending a regularly scheduled physical and realizing with a shock that he is wearing his costume under his clothes and the doctor is going to ask him to disrobe. Yes, the writers often conveniently forget about his spider-sense and have him clubbed unconscious with a brick to thicken the plot. I acknowledge that the comic doesn’t exactly present Peter as the sharpest crayon in the box. But he’s still the hero. He’s still the guy who, when bad things happen to him, we’re encouraged to sympathize with.

Here’s this Sunday’s The Amazing Spider-Man. The one that runs daily in newspapers, not the one that comes out monthly from Marvel. 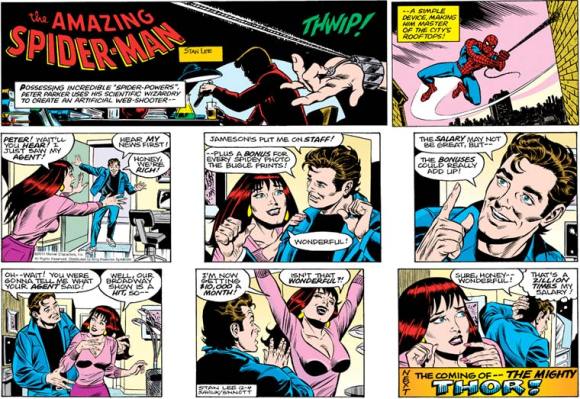 So, Peter Parker has just gotten Jonah Jameson to put him on staff instead of stringing him along as a freelancer, and he runs home to tell Mary Jane the news of their shared financial success. They are, after all, a married couple who naturally share finances. Mary Jane has her own great news, however. Says our favorite newspaper comics commentator (okay, our only newspaper comics commentator) Josh Fruhlinger:

Last month my wife got a promotion, and now she makes more than me! I responded by mumbling something insincere and then stalking off to sulk. (Ha ha, just kidding, I congratulated her effusively and then we went and had a nice dinner, because I’m not a complete jackass.)

Now, lets get a word in from David Willis, a long-time reader of the comic and comics artist himself. After being asked: “Then again, maybe it’s one of those Aesop stories where, after some fights with villains that uncannily relate to his current situation, Peter gets a moral lesson that his actress wife making more than him shouldn’t bother him and he’ll end up knowing better…” he responds:

I would have some hope for that if “Peter gets hurt because his wife makes more money than him” weren’t a story hook that happened EVERY SINGLE YEAR since FOREVER.

As long time readers of Josh Fruhlinger’s Comics Curmudgeon, if not the Spider-Man newspaper comic itself, we can corroborate that this is indeed a common theme in the strip. Thematically, of course, the core of Peter Parker’s character is that he constantly down on his luck financially and socially, to contrast with the brave good deeds he performs as Spider-Man, and also in contrast to Marvel’s other characters like Iron Man, Thor, or the Fantastic Four; who have comparatively blissful secret lives out of costume. This was a somewhat revolutionary superhero trope when Spider-Man debuted in the 60s, and Stan Lee continued to use it for characters like the X-Men. So, if good things happen to Peter, it is thematically appropriate that bad things happen to balance it out and keep him in the “loser” status.

But let’s be clear: your wife getting a huge raise is not a misfortune, though the strip presents it as one. (Lets not even get into the fact that no one would expect a photojournalist in print media to make more money than his wife, a successful actress, except to say that what most people would assume about such a situation is that both partners are doing jobs that they love and must feel blessed to be able to do so.) So when Peter immediately responds with overt feelings of worthlessness not only is he being an asshole to his wife, he is also asking for her to sympathize with his reasons for being an asshole to her. His reasoning goes “I must really suck as a person if I can’t make more money than a woman.” It’s all part and parcel of the ball of internalized ideas that men should be the providers, and feel guilty when they cannot (fallacy problem number 1, which sucks for guys) and that, as the “fairer” sex, women should accept that they should be supported by their husbands and forget (or feel conflicted about) their own efforts towards financial independence (fallacy problem number 2, which sucks for ladies).

And there’s really no excuse, in a year that begins with the numbers 20, that a widely distributed comic strip should be perpetuating the idea that a guy must really be failing as a human being if he makes less money than a woman.