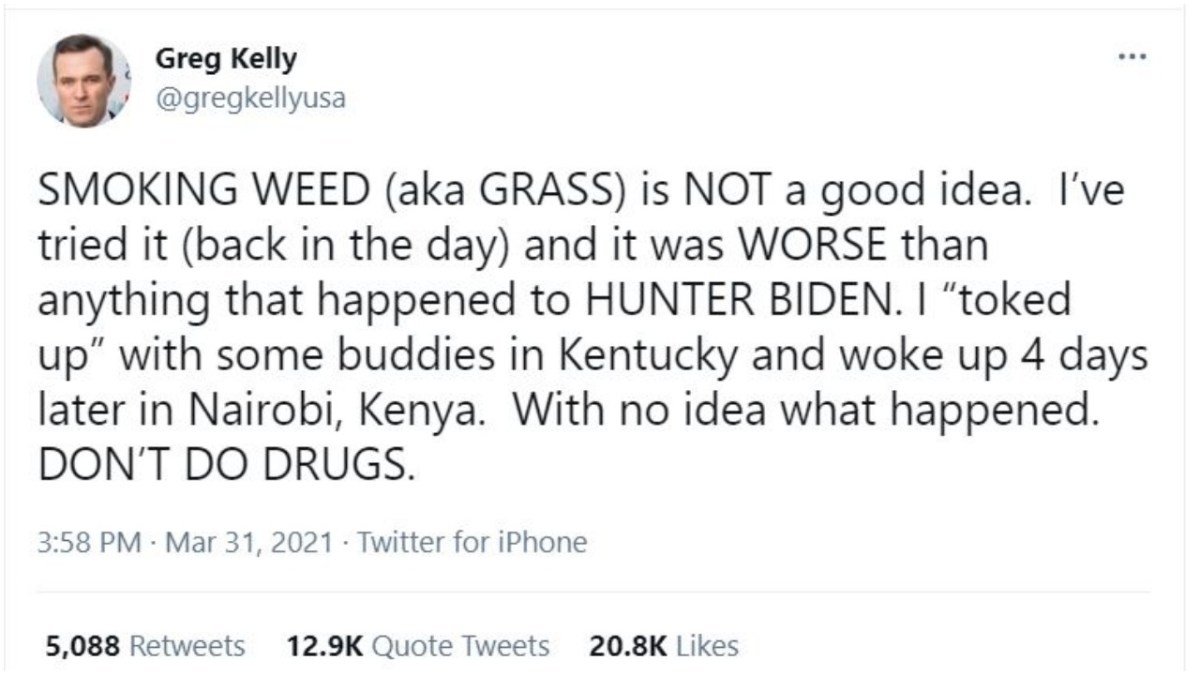 It’s been 85 years since the premiere of Reefer Madness, a propaganda film that wildly exaggerated the effects of smoking marijuana. Nowadays, most of us know (and science has verified) that marijuana is neither a gateway to hard drug use nor a life-ruining experience that causes violence, murder, or mayhem (the history of its being criminalized in the United States is also deeply rooted in racism and xenophobia). As a result of advocacy and shifting public opinion, several states have legalized recreational marijuana, the most recent being New York, which legalized weed just yesterday, tying the bill to racial and economic equity.

However, the growing acceptance of marijuana is still being met with fearmongering and propaganda, especially from conservatives. On Wednesday night, Newsmax host Greg Kelly tweeted a warning about the devil’s lettuce that got a lot of attention on social media. (Newsmax is, of course, the channel of choice for conservatives who are mad at Fox News for calling the 2020 election for Biden.)

Kelly wrote, “SMOKING WEED (aka GRASS) is NOT a good idea. I’ve tried it (back in the day) and it was WORSE than anything that happened to HUNTER BIDEN. I “toked up” with some buddies in Kentucky and woke up 4 days later in Nairobi, Kenya. With no idea what happened. DON’T DO DRUGS.”

SMOKING WEED (aka GRASS) is NOT a good idea. I’ve tried it (back in the day) and it was WORSE than anything that happened to HUNTER BIDEN. I “toked up” with some buddies in Kentucky and woke up 4 days later in Nairobi, Kenya. With no idea what happened. DON’T DO DRUGS.

Hold on … is this man saying that he smoked a joint and woke up four days later on a different continent!? This is patently absurd, as any marijuana user can tell you. The furthest I’ve ever traveled while high has been from my couch to my bed, and when you’re baked it honestly feels like a journey to Mordor.

Kelly’s bizarre tweet got quickly roasted on Twitter, with many mocking both his outrageous story and his use of the dated slang “grass,” i.e. a word only our parents and narcs still use. (For the record, Kelly is 52, not 102.) Many also wonder what exactly Kelly smoked, or if his joint was laced with angel dust or PCP, actual hallucinogens that will mess you up.

I don’t know why no one told you prior to this but you and your buddies weren’t smoking weed. 😐 pic.twitter.com/2gglr5PtCj

DRINKING FIZZY LIFTING DRINKS is NOT a good idea. I’ve tried it and it was WORSE than anything that happened to GREG KELLY. I “toked up” with my grandpa during a tour of a chocolate factory and we nearly got sliced by ceiling fans. Four other kids died. DON’T DO CANDY. pic.twitter.com/CAAUMt4fZH

Cheers to all who have “toked up” in Kentucky and ended up in Kenya because that’s definitely a thing that happens when you smoke weed https://t.co/OXp6jkmwdV

honey, you did PCP.

okay so confession time I’m one of Greg Kelly’s “buddies” in Kentucky. We all hate him and thought it would be funny if we drugged him and mailed him to Nairobi like Garfield sending Nermal to Abu Dhabi https://t.co/EqgL0gLUhQ

Keep in mind that Kelly is a notorious conspiracy theorist, who has also claimed that Champ and Major Biden aren’t really the Biden’s dogs. He also tried to blast McDonald’s for no longer offering the “McFish” and calling him a “male Karen.” FYI, it’s called the Filet-O-Fish, dude. I thought you were a journalist.