Designer of iPod Touch Has New Toy on Kickstarter, We’d Like One Immediately 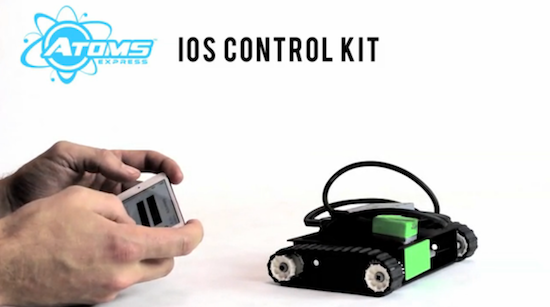 Just in time for the holidays, Michael Rosenblatt, the lead designer of the first iPod Touch, has a new toy — Atoms Express. Atoms Express is a modular building toy that claims to let kids “make things that do things.” We’ve always wanted to let kids make things do things! That’s the best. It’s currently making its way through Kickstarter right now, but maybe we can have it in time for the holidays next year? Please?

Though they’re instantly reminiscent of LEGO Mindstorms, the main difference appears to be that Atoms don’t require the user to do any coding. It’s plug and play in the most literal sense. The goal is to make it easy for kids (or geek bloggers) to be able to pick up Atoms and begin building right away.

The key to Atoms is that the system is made up of different modules that can all easily be linked together. The motor can be attached to a light sensor, making a toy car that only drives when the lights are on. As in the Kickstarter video, users could build a robot that seems to be afraid of the light.

Atoms also work with LEGO, which is great. Any kid that would want this probably has a decent LEGO collection already. Each module serves a different purpose. One of the blocks “explodes,” and is used in the video to demolish a LEGO house after being triggered by the light sensor when a little girl tries to take a picture of it. One of the most exciting, and expected from the guy who designed the iPod Touch, features is iOS integration. We relish the chance to control things with our phones, especially when it’s something we built.

The Kickstarter has a goal of $100,000 and is offering Atoms kits, among other incentives, for the various tiers. The video on the Kickstarter page outlines a variety of features and shows kids playing hands-on with different Atoms kits. Take a look: