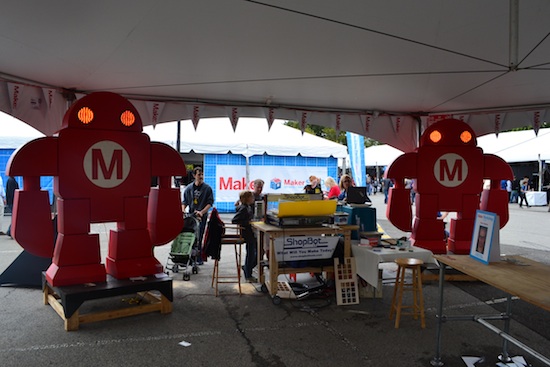 We spent this Saturday at New York’s Maker Faire 2012 gawking at  cool DIY gadgets and gear from labs, garages, and hackerspaces near and far. We’ll have a gallery of some of our favorite pictures from the show up soon, but for now, here are our first reactions on this year’s Maker Faire.

You Built What? Moment: Has to go to Jesse and Kat Green, the husband and wife maker team behind Katy Perry, The Unicorn, a unicorn statue that sneezes glitter, shoots gouts of green flame from its glorious fiery horn, and urinates a beverage of your choice. Whatever keg you hook it up to, not whatever you’re wishing for at the time — despite the presence of a unicorn, this remains science, not magic.

Safest Combination of Beer and Wheeled Vehicles (Probably Ever): “Brewing as Art” is a pragmatic art project from metal artist Scott van Campen and brewer Mark Zappasodi –a steampunk-inspired contraption on wheels that can brew up to 10 gallon batches of your favorite homebrew all on one self-contained mobile platform.

Most Fun Live Demo: Last year, I didn’t hang around long enough to get a look at Life-Size Mousetrap. This year, I amended that mistake, and am a better person for it. 16 pieces and 50,000 pound of Rube Goldberg device madness — including a hand-built, hand-cranked crane a couple of stories high — combine with a circus atmosphere for the most fun you’ll ever have watching a safe fall on the world’s most harassed looking Honda Civic.

Most Jealousy Inducing Piece of Gear: The motorized, controllable hammock from North Street Labs. . We’ve never seen a person look so downright comfy operating a vehicle. Or so nerdy operating a hammock. This marvel of modern engineering proves that you really can have it all.

Souvenir We Bought That Proves We’re Still 10: Astronaut ice cream. What can I say, I just couldn’t pass up the opportunity to find out if the deliciousness of Mint Chocolate Chip ice cream could withstand the process of freeze drying. Verdict: It totally can.

Most Disappointing Realization: The weirdest vibe we got off Maker Faire this year was that, despite advances in the technology, 3D printing actually seems farther away from mainstreaming than it did at last year’s fair. Mostly similar models and toys at multiple tables left one with the feeling that while the tech is moving forward, what people are doing with it isn’t necessarily keeping pace. That’s not to say there weren’t cool things, like the intricately 3D crafted Octopod model. For all the neat stuff, though, progress felt mostly incremental, and we couldn’t help but feel as if we had basically seen a lot of these tricks before. Maybe we were being overly sanguine about the state of the industry, but to walk away feeling like there’s no game changing moment for 3D printing on the horizon was really disappointing. The whole thing needs an “aha moment,” someone doing something very cool we’ve never seen before, if it’s going to hit the mainstream, and this reporter’s suspicion is that it needs that moment sooner rather than later. Without it, the Makerbot Replicator and its look-alikes run the risk of being permanently relegated to hobbyist toys. We think they can be more than that. We really hope someone proves us right soon.