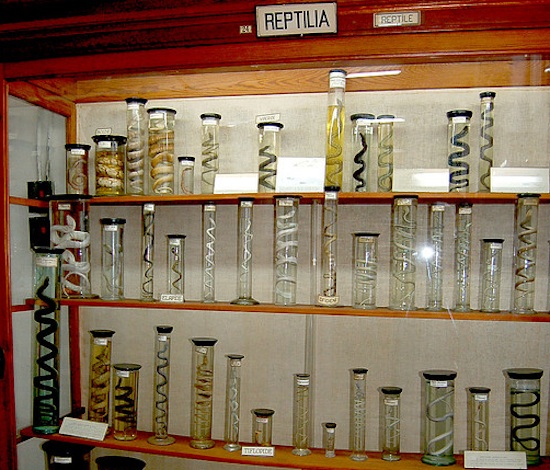 Earlier this year, snake researchers Johan Elmberg and Arne Rasmussen were looking through a collection of sea snakes perserved in jars of formaldehyde in the bowels of Copenhagen’s Natural History Museum — you know, like ya do — when they came upon a pair of very different looking snakes bearing the same specimen name. Something smelled wrong to the pair, and it wasn’t just the gallons upon gallons of formaldehyde and dead snake. That began a search for proof that one of the snakes was a species never before described by science that ended today with the introduction of a new species to the books.

So today,  we say welcome to official existence, mosaic sea snake. We look forward to learning more about you, but here’s what we know so far. The mosaic sea snake (Aipysurus mosaicus) is named for its unique markings, which recall a Roman tile mosaic. It is entirely aquatic and never surfaces onto dry land, and is still fairly common in the oceans around northern Australia. Since it subsists entirely on a diet of fish eggs, it has tiny useless fangs, which is actually kind of adorable when you think about it.

Aipysurus mosaicus went undiscovered for so long because it is closely related to another species, Aipysurus eydouxii. As the hunt for the species of the mystery snake in the Copenhagen museum narrowed, though, DNA tests on members of both species showed them to be closely related but distinct species.