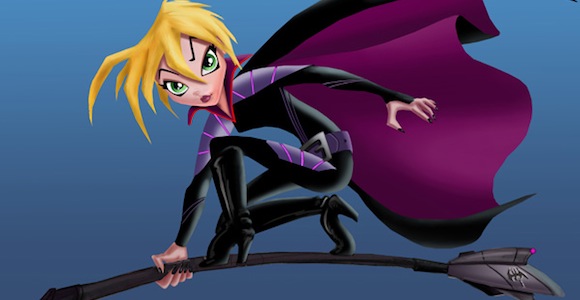 It’s been eight years since there was a version of Sabrina the Teenage Witch on television, whether in animated form or starring Clarissa Explains it All veteran Melissa Joan Hart. Today Archie Comics announced that they’ll be partnering with Moonscoop entertainment to bring a computer animated Sabrina show to networks soon, hopefully to air by October of next year. Halloween debut, anyone?

Is it just me, or does it seem like people name drop Twilight when what they actually want to say is “stories with magic in them aimed at girls?” (As if that hasn’t pretty much been a whole genre for decades now anyway.) In any case, we’ll forgive the name dropping simply because it’s so closely followed by Buffy.

And because the rest of what the LA Times describes doesn’t sound much like Twilight at all. 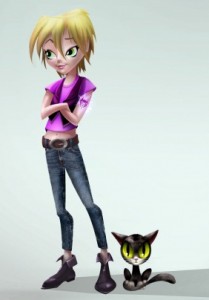 Story wise, the project aims to be more action-oriented than previous incarnations like ABC’s short-lived Saturday morning “Sabrina: the Animated Series” (1999-2000) or the sitcom starring Melissa Joan Hart that ran from 1996-2003 on both ABC and then the WB network.

Even Salem, the magical cat, will be re-imagined – he’s a tad more naughty this time around.

…“With Harry Potter coming to an end, we wanted to fill that void,” says MoonScoop CEO Mike Young. “She’s a teenage girl with superpowers for god’s sake. So Sabrina fits perfectly.”

I’ll always lend my support to efforts that’ll bring action cartoons for young girls into existence, since pretty much everything I watched as a kid was an action cartoon intended for boys. I’m also intrigued by the concept art. A tattooed, crop haired, boyish heroine in a vest, t-shirt and boots, and with an intriguingly technological themed witch costume and broom. Sure! Let her hunt some vampires.

The only way this could merit my approval more is if Nick Bakay was on board to voice Salem again.