Some Really Bad Suggestions for the Newly Discovered Class of Star

There's a newly discovered class of variable star that doesn't have a name yet, so we suggest some silly names. 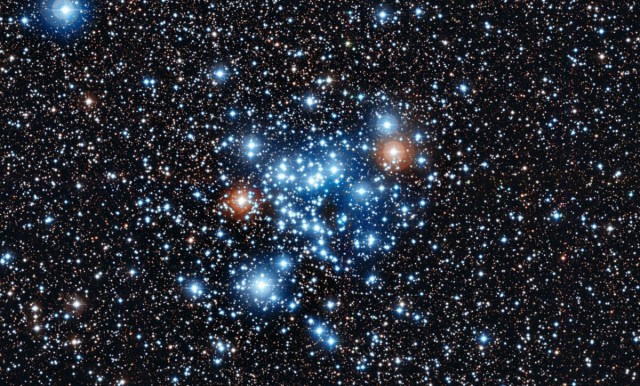 A Swiss team of astronomers has discovered a new class of star by studying open cluster NGC 3766 over the course of seven years from the Geneva Observatory. The study looked at more than 3,000 stars in the cluster, but it was the action of 36 of them that stood out as a new class. The class is yet to be given a name, so we’ve obviously come up with a bunch of dumb suggestions.

The 36 stars in question demonstrate tiny variations in brightness ranging only one-tenth of a percent of their normal brightness for period of between two and 20 hours. The detection of these incredibly slight variations was only possible with the current high level of precision available in modern telescopes.

The telescope used was the Swiss made Leonhard Euler Telescope at ESO’s La Silla Observatory in Chile, which is actually quite small as far as telescopes are concerned, measuring just 1.2 meters in diameter. The leader of the research team Nami Mowlavi also credits the team’s analysis, saying:

We have reached this level of sensitivity thanks to the high quality of the observations, combined with a very careful analysis of the data, but also because we have carried out an extensive observation programme that lasted for seven years. It probably wouldn’t have been possible to get so much observing time on a bigger telescope.

It’s essentially an “It’s not the size that matters, it’s how you use it,” argument, but with telescopes. The newly observed variations in brightness of these 36 stars calls into question what astrophysicists believed they knew about variable or pulsating stars.

The very existence of this new class of variable stars is a challenge to astrophysicists. Current theoretical models predict that their light is not supposed to vary periodically at all, so our current efforts are focused on finding out more about the behaviour of this strange new type of star.

What causes the changes in brightness of variable stars is unknown, but it could tie in to the fact that they rotate at more than half of their critical velocity. The newly discovered class of variable stars could hopefully shed some variable light on the subject.

The class of stars doesn’t have a name yet, and we don’t know if science is taking suggestions for names, but we’ll make some anyway.

There you go, Science! Hope that helps.